Report of the Railway Department of the Board of Trade on the London, Worcester, and Wolverhampton, and on the Birmingham and Shrewsbury Districts 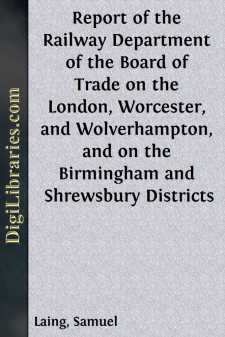 The Board constituted by Minute of the Lords of the Committee of Privy Council for Trade, for the transaction of Railway business, having had under consideration the different schemes deposited with the Railway Department for extending Railway communication between London, Worcester, and Wolverhampton, and in the district intermediate between the London and Birmingham and Great Western Railways, and also, in connexion with the above, the schemes for extending Railway communication between Birmingham and Shrewsbury, have determined on submitting the following Report thereon for the consideration of Parliament.

The object of the first class of schemes in question is to supply Railway communication to the great mining district of Staffordshire, lying south of Wolverhampton, to the towns of Kidderminster, Stourbridge, Stourport, Worcester, &c., and to the district north of Oxford, intermediate between the Great Western and London and Birmingham Railways.

For this purpose two competing schemes are proposed; one, which is promoted by the London and Birmingham Company, comprises a line from Rugby to Oxford, and another from Wolverhampton, through Worcester and Banbury, to join the London and Birmingham line at Tring; the other scheme consists of a line from Oxford to Rugby, which is proposed to be made by the Great Western Company; and of another line from Oxford to Worcester and Wolverhampton, which is undertaken by an independent Company, but in connexion with the Great Western Company, and which must be considered as forming, with the Oxford and Rugby line, one scheme, competing with the former.

For the sake of brevity we shall distinguish these as the “London and Birmingham or Tring Scheme,” and the “Great Western or Oxford Scheme.”  Their general direction will be easily understood by reference to the accompanying map.

In their general features and objects the two schemes are so nearly identical that the two manifestly cannot stand together.  A further scheme for the accommodation of the country between Worcester and Wolverhampton, was proposed by the Birmingham and Gloucester Company, but it is understood that arrangements have been made by which this scheme is withdrawn in favour of the London and Birmingham scheme, to which it was moreover inferior in several important respects, so that we may consider the question as reduced to one of competition between the schemes of the two great Companies.

The first point is, whether a sufficient public case can be established to justify the construction of any Railway at all throughout the districts in question.  As regards the South Staffordshire district, this point has been disputed by various Canal interests, who urge that the district is already sufficiently well supplied by water communication, and that the introduction of Railways, by destroying the resources and crippling the efficiency of such water communications, will be productive of injury rather than of benefit to the Public.  Various special reasons have been urged in support of this view, more especially with reference to the mineral district of which Dudley may be considered as the centre.  It is said that the Birmingham Canal Company have, at a great expense, created a very complete and efficient system of water communication throughout this district; that a right is reserved of making branch Canals to all mines and works within certain limits, which right would be to a certain extent defeated by running a Railway parallel to the existing Canal, to the injury both of the Canal Company, and of the owners of the mines and works so cut off; that the management and charges of the Canal Company have always been of the most liberal description; and finally, that owing to the peculiar nature of the district, in which great excavations have been made for mining purposes, Railways cannot be carried through it without danger....