Report of the Proceedings at the Examination of Charles G. Davis, Esq., on the Charge of Aiding and Abetting in the Rescue of a Fugitive Slave Held in Boston, in February, 1851. 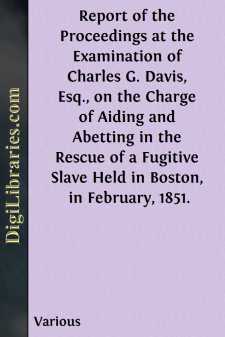 On the 13th of February, A.D. 1851, one John Caphart, of Norfolk, Va., came to Boston, in pursuit of one Shadrach, alleged to be a fugitive slave and the property of John Debree, a purser in the navy, and attended by Seth J. Thomas, Esq., as counsel, made his complaint, as agent and attorney of the said owner, before George T. Curtis, Esq., U. S. Commissioner. On the evening of the 14th, the following warrant was placed in the hands of special marshal Sawin, and served, Shadrach offering no resistance, about half-past 11 on Saturday forenoon, the 15th, at the Cornhill Coffee House, where Shadrach had been employed for some months as a waiter:—

Massachusetts District, ss. To the Marshal of our District of Massachusetts, or either of his deputies.[Seal]Greeting:

These are, in the name of the President of the United States of America, to command you, the said marshal or deputies, and each of you, forthwith to apprehend one Shadrach, now commorant in Boston, in said district, a colored person, who is alleged to be a fugitive from service or labor, and who has escaped from service or labor in the state of Virginia, (if he may be found in your precinct), and have him forthwith before me, one of the commissioners of the circuit court of the United States for the Massachusetts district, at the court house in Boston aforesaid, then and there to answer to the complaint of John Caphart, attorney of John De Bree, of Norfolk, in the state of Virginia, alleging under oath, that the said Shadrach owes service or labor to the said De Bree, in the said state of Virginia, and while held to service there under the laws of the said state of Virginia, escaped into the state of Massachusetts aforesaid, and praying for the restoration of the said Shadrach to the said De Bree, and then and there before me to be dealt with according to law.

Hereof fail not, and make due return of this with your doings thereon, before me.

Witness my hand and seal at Boston, in the said district, on this fourteenth day of February, in the year of our Lord, one thousand eight hundred and fifty one.

The following return was endorsed upon the warrant:—

In obedience to the warrant to me directed, I have this day arrested the within named Shadrach, and now have him before the commissioner within named.

A hearing was had in the U. S. court room, and several papers, being affidavits and certificates of a record, were exhibited by the complainant's counsel, as the evidence under the 10th section of the Fugitive Slave Law so called, that Shadrach was a slave in Virginia, that he was owned by said De Bree, and that he escaped on the 3d of May, 1850. At the request of counsel these papers were read and admitted as evidence in the case, subject to such objections as might be made to their admissibility as legal evidence thereafter.

There were present as counsel for Shadrach, S. E. Sewall, Ellis G. Loring, Charles G. Davis, and Charles List, and as they had not had an opportunity to examine the documents produced by the complainant, and were therefore not satisfied of their sufficiency, they asked for a postponement, to February 18th, and the commissioner adjourned the further hearing of the matter until 10 o'clock, on Tuesday, February 18th, and passed the following order:—

United States of America, District of Massachusetts, February 15th, 1851.—And now the hearing of this case being adjourned to Tuesday the eighteenth day of February instant, at ten o'clock in the forenoon, the said deputy marshal, who has made return of this warrant, is hereby ordered to retain the said Shadrach in his custody, and have him before me at the time last mentioned, at the court house in Boston, for the further hearing of the complaint on which this warrant is issued.

On the following Tuesday, P. Riley, Esq., Deputy U. S. Marshal, appeared before the Commissioner, George T. Curtis, Esq., and offered the following return which was annexed to the above order.

I hereby certify, in pursuance of law and the foregoing order, the said "Shadrach" named in the foregoing warrant and order, was being detained in my custody in the Court Room of the United States, in the Court House, in said Boston, when the door of said room, which was being used as a prison, was forced open by a mob, and the said "Shadrach" forcibly rescued from my custody. I also annex hereto, and make part of my return an original [printed] deposition, of the circumstances attending the arrest and rescue, and have not been able to retake said Shadrach, and cannot now have him before said Commissioner for reasons above stated.

I, Patrick Riley, of Boston, in the said county, counsellor at law, having been duly sworn, depose and say, that I am, and have been, for fourteen years past, the principal deputy of the United States Marshal for the District of Massachusetts.

That on Saturday morning, February 15th, 1851, about twenty minutes before 8 o'clock, A.M., I was called upon at my residence, by Frederick Warren, one of the U. S. deputy marshals, who informed me that there was a negro man, an alleged fugitive, to be arrested at 8 o'clock, who was supposed to be at Taft's Cornhill Coffee House, near the Court House, and desired to know where the negro should be put in case he should be arrested before I reached the office; that I told him to place him in the United States Court Room,—and that I would come to the office immediately,—that I came down almost immediately to the office, where I arrived shortly after 8 o'clock, and there found Mr....