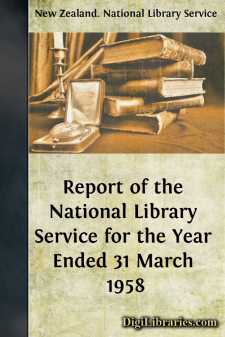 The functions of the Service may be summed up as the provision of such assistance to any New Zealand library maintained directly or indirectly from public funds as circumstances and policy permit. More specifically, help is given by a lending service to rural, borough, and county libraries, by the provision of books for school libraries, by advancing professional training through the Library School, and by maintenance of records of all library holdings of books and periodicals, as well as other facilities and stock to aid the cooperative use of this material.

The Country Library Service, which began in 1938, has maintained its van services to rural areas and has been brought into closer contact with its districts by decentralisation to three district offices—Christchurch in 1944, Palmerston North in 1948, and Hamilton in 1953.

The number of free libraries regularly receiving service has grown to 112. Special assistance in a number of cases has been given to libraries serving a population of up to 50,000 operating a free and rental service. The assistance given to the Gisborne and Wanganui Public Libraries has continued. New Plymouth Public Library which changed to free service in November 1957, and Palmerston North Public Library, which is expanding its service, have also received assistance. The fundamental principle of encouraging full local responsibility for adequate rate-supported libraries has continued.

The School Library Service has continued to bring a wide range and variety of books to school children, the rate of issue now exceeding one million copies annually. Distribution is effected through 15 centres.

During the year this Service received three valuable sets of books chosen to represent all phases of American life and thought. The Carnegie Corporation of New York made these sets available to some 26 libraries in New Zealand.

—A recommendation has been made by the New Zealand Library Association that impetus be given to scientific and technical library service, chiefly through public libraries. At a time when increasing reliance is being placed on the efficiency of our secondary industry the necessity of providing the fullest technical information to aid manufacturers will be apparent....