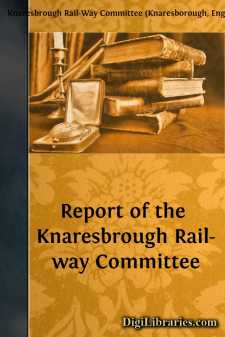 If the River Nidd and the brooks adjacent, in the vicinity of Knaresbro’, up the valley to Ramsgill, near Pateley-Bridge, and near the adopted line, had not possessed the many water-falls, and given motion to the sixty-seven mills which they do;—or had the great landed proprietors, on the line now adopted been hostile to this all improving project, of this highly favoured and not less honoured, their native district;—or had the hand of Nature, when it varied the surface of our earth, no doubt for wise purposes, and formed those high hills, composed their bowels of any other substance than what it is;—or had the commercial necessities of Knaresbro’ and its neighbourhood not existed, and the slow progress of their redemption, compared with others, at one time of far less note, not been too apparent; then, perhaps, this project, commendable as it is, would have shared the same fate, during a season of sickness, which it did twenty years ago.

But since these falls of water do exist, and are always ready to lend their willing aid to turn the ponderous wheels which impart motion to many mill-stones and many thousand spindles, beyond the possibility of denial;—and since the great landed proprietors have expressed nothing unfriendly to the project, but, if any thing, the reverse, at this moment of national difficulties and distress, highly to their credit and understanding;—and since the all-wise hand of Providence hath permitted an unceasing demand in one place, and a never-failing supply in another, at distances perhaps the most suitable and interesting for a work of this kind; —and, considering the necessity which the commerce of this district so evidently requires in an improved mode of transporting, from place to place, its heavy weights, with despatch and cheapness; then there can be no doubt of the propriety of prosecuting a scheme of this kind, so long, as we believe, on substantial data, that the completion of it will reward the shareholder, and give to this place what it once possessed, and be the means of rendering it again the first district in the kingdom for the manufacture of linens.

REPORT OF THE COMMITTEE.

At a meeting held the 16th day of March, 1818, in the Town’s-Hall, at Knaresbro’, your Committee were authorised to appoint a suitable person to take a survey of the country, in order to point out the most eligible line for a Canal to Knaresbro’.

After various correspondence with different engineers, the choice of your Committee fell upon Thomas Telford, Esq. a gentleman of long experience, and of whose abilities, as a civil engineer, every reliance was placed.  About the latter end of May following, this gentleman visited Knaresbro’, viewed the localities of the place, took running and comparative levels over the shortest and most convenient ground, to the higher side of Linton-lock, and also towards Tadcaster.  In the latter direction, as being a more direct communication with the port of Hull, he fully recommended a close survey to be made, for which purpose he sent his assistant Mr. Palmer, who commenced the survey with such other assistance as he required, about the latter end of June, and continued surveying and levelling in various directions until the middle of September;—about this time your Committee became alarmed for the success of the intended Canal, both on account of the unfavourable ground between the town of Knaresbro’ and Ribston, and the difficulty of obtaining a sufficient head of water in a natural manner.

Besides at this time the elevated situation of Knaresbro’ above the Wharfe was ascertained to be 198 feet, equal to 22 locks of 9 feet each; and hence, even if water could be obtained at a cheap rate, by artificial means, the number of locks requisite for locking down into a navigable part of the river Wharfe or Ouse, distant about twenty miles, would alone render the project unadvisable, by swelling the expense of the work in such a manner as would totally destroy the expected advantages to be derived by the trade of Knaresbro’ and the surrounding neighbourhood, or leave little or no hopes for the shareholders receiving a fair per centage for their money embarked.

Under these circumstances your committee abandoned all further hopes of a Canal, and notwithstanding the funds then collected for the survey were exhausted, they relied on the same spirit which gave rise to the project, and felt convinced of the great utility and advantages of a Rail-way, if taken from a navigable part of the river Wharfe, and continued, passing Knaresbro’, up the valley to Pateley-Bridge....