Report of the Chief Librarian for the Year Ended 31 March 1958: Special Centennial Issue 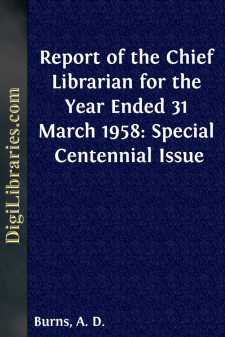 I have the honour to report on the activities of the General Assembly Library for the year 1957-58.

The year 1958 marks the end of the first century of the Library's existence, I have thought it a good opportunity to tell briefly the history of the Library during the period in an appendix to this report.

Staff changes have not been as great during the past year, though Mr C. B. Newick resigned to go overseas and there were four other resignations and appointments. Fortunately these did not greatly affect the senior staff.

Routine work has mainly occupied the staff though stock was taken of class 500 (science) and 600 (useful arts). A few books were missing but losses are not serious.

During the year the new circulation counter was erected in the lobby downstairs. Not only does it improve the appearance of the area, but the change has enabled proper oversight to be given over those leaving the Library. The new books are now placed in the room next to my office and are immediately available to members.

Once again the Library has to record its thanks to the many individuals and organisations for their kindness in presenting large numbers of books and periodicals. All have received letters of thanks, but once again we should like to express our thanks to those concerned for so much material that might otherwise not reach the Library. This year one donation was of such value and importance that it must be specially mentioned. It was the gift of 350 books by the Carnegie Corporation of New York. This collection has been specially selected to portray United States life and to explain its origins. It has proved exceedingly popular and has added many fine books on the United States to the Library. The Library is grateful to the Corporation for its generosity in presenting the collection.

A better guide to the stocks of the Library is the estimate prepared in connection with the census of libraries being held this year. A quick count of the books on 1 April 1958 gave a total of 240,450, plus 65,960 pamphlets and 18,860 maps. The figure for pamphlets is, I believe, slightly exaggerated as many are little more than single sheets and others now listed as several pamphlets will eventually be made into a single bound volume.

Every attempt continues to be made to ensure that all material coming within the terms of the Act is deposited and preserved....