Report of the Chief Librarian for the Year 1924-25 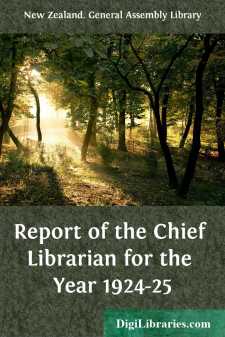 The Chief Librarian to the Chairman of the Joint Library Committee.

I have the honour to submit the following report for the year 1924-25:—

The Recess Library Committee, the constitution of which was altered by resolution passed by both Chambers of the Legislature at the close of last session, held three meetings during the recess, under the chairmanship of the Hon. the Speaker of the House of Representatives, the Hon. Charles E. Statham. Two of these meetings were informal, as a full quorum was unobtainable. At the third meeting, however, there was a full quorum, and the business done at the previous meetings was duly confirmed. In view of the great difficulty which obtains of securing a quorum at the meetings as called, the question is worth consideration as to the desirableness of making some slight alteration in the rule under which the Recess Committee is now constituted.

Additions to the Library.

The number of new accessions since the date of the last report is 2,089, which is lower than that in the previous Library year, the previous total having been 2,700. This latter, however, includes some 500 volumes of the Herries bequest. Owing to the financial position of the Library being much better at the end of the financial year, it is more than probable that next year's report will chronicle a substantially higher increase.

The various volumes of the Herries bequest have been repaired and rebound where necessary, and have been added to the shelves in their respective classes.

The total number of catalogued books and other accessions on the 18th June was over 109,705—which, in view of the fact of the greatly enhanced cost of books (the Library vote, £700, being to-day only £100 a year more than it was thirty years ago), must be deemed satisfactory.

Important orders for new books are now in course of execution, the volumes being due early in this year's session. An attempt has been made to cover all the more important additions in literature on the great problems of the day; and, whilst economy has had to be practised, and a careful selection made of the books and publications generally which really count, it will, I think, be found that very few works of outstanding merit and importance have been overlooked.

In accordance with the policy of not clashing with the Alexander H. Turnbull Library, rare and expensive works of literature dealing with the early history of New Zealand, Australia, and the Pacific have not been bought, but all works of recent and current interest on the Dominion and the Commonwealth, or affecting the various problems of the Pacific, are regularly added.

Works on various political and social problems continue to be more specially favoured by members of both branches of the Legislature, to whom baskets of books are forwarded during the recess. After these, biography is most in favour.

During the greater part of last year's recess the Chief Librarian was absent in Australia in quest of better health; and he may be pardoned, I trust, for here expressing his personal gratitude to the Minister in Charge of the Legislative Department (the Hon....