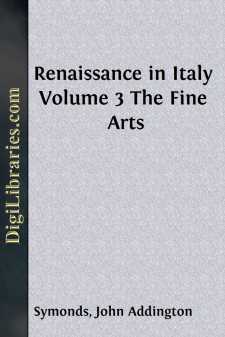 It has been granted only to two nations, the Greeks and the Italians, and to the latter only at the time of the Renaissance, to invest every phase and variety of intellectual energy with the form of art. Nothing notable was produced in Italy between the thirteenth and the seventeenth centuries that did not bear the stamp and character of fine art. If the methods of science may be truly said to regulate our modes of thinking at the present time, it is no less true that, during the Renaissance, art exercised a like controlling influence. Not only was each department of the fine arts practised with singular success; not only was the national genius to a very large extent absorbed in painting, sculpture, and architecture; but the æsthetic impulse was more subtly and widely diffused than this alone would imply. It possessed the Italians in the very centre of their intellectual vitality, imposing its conditions on all the manifestations of their thought and feeling, so that even their shortcomings may be ascribed in a great measure to their inability to quit the æsthetic point of view.

We see this in their literature. It is probable that none but artistic natures will ever render full justice to the poetry of the Renaissance. Critics endowed with a less lively sensibility to beauty of outline and to harmony of form than the Italians, complain that their poetry lacks substantial qualities; nor is it except by long familiarity with the plastic arts of their contemporaries that we come to understand the ground assumed by Ariosto and Poliziano. We then perceive that these poets were not so much unable as instinctively unwilling to go beyond a certain circle of effects. They subordinated their work to the ideal of their age, and that ideal was one to which a painter rather than a poet might successfully aspire. A succession of pictures, harmoniously composed and delicately toned to please the mental eye, satisfied the taste of the Italians. But, however exquisite in design, rich in colour, and complete in execution this literary work may be, it strikes a Northern student as wanting in the highest elements of genius—sublimity of imagination, dramatic passion, energy and earnestness of purpose. In like manner, he finds it hard to appreciate those didactic compositions on trifling or prosaic themes, which delighted the Italians for the very reason that their workmanship surpassed their matter. These defects, as we judge them, are still more apparent in the graver branches of literature. In an essay or a treatise we do not so much care for well-balanced disposition of parts or beautifully rounded periods, though elegance may be thought essential to classic masterpieces, as for weighty matter and trenchant observations. Having the latter, we can dispense at need with the former. The Italians of the Renaissance, under the sway of the fine arts, sought after form, and satisfied themselves with rhetoric. Therefore we condemn their moral disquisitions and their criticisms as the flimsy playthings of intellectual voluptuaries. Yet the right way of doing justice to these stylistic trifles is to regard them as products of an all-embracing genius for art, in a people whose most serious enthusiasms were æsthetic.

The speech of the Italians at that epoch, their social habits, their ideal of manners, their standard of morality, the estimate they formed of men, were alike conditioned and qualified by art. It was an age of splendid ceremonies and magnificent parade, when the furniture of houses, the armour of soldiers, the dress of citizens, the pomp of war, and the pageantry of festival were invariably and inevitably beautiful....