Renaissance in Italy, Volume 1 (of 7) The Age of the Despots 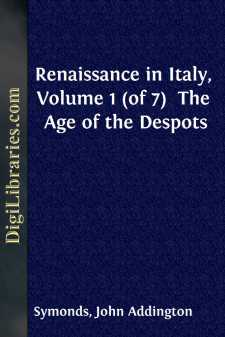 CHAPTER I. THE SPIRIT OF THE RENAISSANCE.

Difficulty of fixing Date—Meaning of Word Renaissance—The Emancipation of the Reason—Relation of Feudalism to the Renaissance—Mediæval Warnings of the Renaissance—Abelard, Bacon, Joachim of Flora, the Provençals, the Heretics, Frederick II.—Dante, Petrarch, Boccaccio—Physical Energy of the Italians—The Revival of Learning—The Double Discovery of the World and of Man—Exploration of the Universe and of the Globe—Science—The Fine Arts and Scholarship—Art Humanizes the Conceptions of the Church—Three Stages in the History of Scholarship—The Age of Desire—The Age of Acquisition—The Legend of Julia's Corpse—The Age of the Printers and Critics—The Emancipation of the Conscience—The Reformation and the Modern Critical Spirit—Mechanical Inventions—The Place of Italy in the Renaissance.

The word Renaissance has of late years received a more extended significance than that which is implied in our English equivalent—the Revival of Learning. We use it to denote the whole transition from the Middle Ages to the Modern World; and though it is possible to assign certain limits to the period during which this transition took place, we cannot fix on any dates so positively as to say—between this year and that the movement was accomplished. To do so would be like trying to name the days on which spring in any particular season began and ended Yet we speak of spring as different from winter and from summer. The truth is, that in many senses we are still in mid-Renaissance. The evolution has not been completed. The new life is our own and is progressive. As in the transformation scene of some great Masque, so here the waning and the waxing shapes are mingled; the new forms, at first shadowy and filmy, gain upon the old; and now both blend; and now the old scene fades into the background; still, who shall say whether the new scene be finally set up?

In like manner we cannot refer the whole phenomena of the Renaissance to any one cause or circumstance, or limit them within the field of any one department of human knowledge. If we ask the students of art what they mean by the Renaissance, they will reply that it was the revolution effected in architecture, painting, and sculpture by the recovery of antique monuments. Students of literature, philosophy, and theology see in the Renaissance that discovery of manuscripts, that passion for antiquity, that progress in philology and criticism, which led to a correct knowledge of the classics, to a fresh taste in poetry, to new systems of thought, to more accurate analysis, and finally to the Lutheran schism and the emancipation of the conscience. Men of science will discourse about the discovery of the solar system by Copernicus and Galileo, the anatomy of Vesalius, and Harvey's theory of the circulation of the blood. The origination of a truly scientific method is the point which interests them most in the Renaissance. The political historian, again, has his own answer to the question....