Renaissance Fancies and Studies Being a Sequel to Euphorion 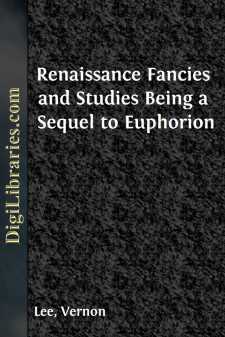 Add to My Favorites
Published: 11 years ago
Downloads: 15
Rating: (0 Votes)

"Panis Angelicus fit panis hominum. O res mirabilis, manducat Dominum Pauper, Servus et Humilis." These words of the Matins of the Most Holy Sacrament I heard for the first time many years ago, to the beautiful and inappropriate music of Cherubini. They struck me at that time as foolish, barbarous, and almost gross; but since then I have learned to think of them, and in a measure to feel of them, as of something greater and more solemn than all the music that Cherubini ever wrote.

All the hymns of the same date are, indeed, things to think upon. They affect one—the "Stabat Mater," for instance, and the "Ave Verum"—very much in the same way as the figures which stare down, dingy green and blue, from the gold of the Cosmati's mosaics: childish, dreary, all stiff and agape, but so solemn and pathetic, and full of the greatest future. For out of those Cosmati mosaics, and those barbarous frescoes of the old basilicas, will come Giotto and all the Renaissance; and out of those Church songs will come Dante; they are all signs, poor primitive rhymes and primitive figures, that the world is teeming again, and will bear, for centuries to come, new spiritual wonders. Hence the importance, the venerableness of all those mediæval hymns. But of none so much, to my mind, as of those words I have quoted from the Matins of the Most Holy Sacrament—

For their crude and pathetic literality, their image of the Godhead actually giving Himself, as they emphatically say, to be chewed by the poor and humble man and the serf, show them to have been most especially born, abortions though they be, in the mightiest throes of mystical feeling, after the incubation of whole nations, born of the great mediæval marriage, sublime, grotesque, morbid, yet health-bringing, between abstract idealising religious thought and the earthly affections of lovers and parents—a strange marriage, like that of St. Francis and Poverty, of which the modern soul also had to be born anew.

Indeed, if we realise in the least what this hymn must have meant, shouted in the processions of Flagellants, chaunted in the Pacts of Peace after internecine town wars; above all, perhaps, muttered in the cell of the friar, in the den of the weaver; if we sum up, however inadequately, the state of things whence it arose, and whence it helped to deliver us, we may think that the greatest music is scarcely reverent enough to accompany these poor blundering rhymes.

The Feast of the Most Holy Sacrament, to whose liturgy this hymn, "O Res Mirabilis," belongs, was instituted to commemorate the miracle of Bolsena, which, coming late as it did, in the country of St. Francis, and within two years of the birth of Dante, seems in its significant coincidences, in its startling symbolism, the fit material summing up of what is conveniently designated as the Franciscan revival: the introduction into religious matters of passionate human emotion. For in the year 1263, at Bolsena in Umbria, the consecrated wafer dropped blood upon the hands of an unbelieving priest.

This trickery of a single individual, or more probably hallucination—this lie and self-delusion of interested or foolish bystanders—just happened to symbolise a very great reality. For during the earlier Middle Ages, before the coming of Francis of Assisi, the souls of men, or, more properly, their hearts, had been sorely troubled and jeopardised.

The mixture of races and civilisations, southern and northern and eastern, antique and barbarian, which had been slowly taking place ever since the fall of the Roman Empire, had seemed, in its consummation of the twelfth century, less fertile on the whole than poisonous....