Reminiscences of a Pioneer 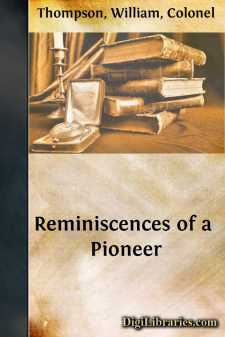 Farewell to the Old Southern Home.

I have often wondered, when viewing a modern passenger coach, with its palace cars, its sleeping and dining cars, if those who cross the "Great American Desert," from the Mississippi to the Pacific in four days, realize the hardships, dangers and privations of the Argonauts of fifty-eight years ago. The "Plains" were then an unbroken wilderness of three thousand miles, inhabited by hordes of wild Indians, and not too friendly to the white man journeying through his country.

The trip then required careful preparation—oxen, wagons, provisions, arms and ammunition must be first of all provided. These were essentials, and woe to the hapless immigrant who neglected these provisions. To be stranded a thousand miles from the "settlements" was a fate none but the most improvident and reckless cared to hazard.

It is to recount some of the trials, adventures, hardships, privations, as I remember them, that these lines are written. For truly, the immigrants of the early 50's were the true "Conquerors of the Wilderness." Cutting loose from home and civilization, their all, including their women and children, loaded into wagons, and drawn by slow-moving ox teams, they fearlessly braved three thousand miles of almost trackless wilderness.

As a small boy I remember the first mention of California, the land of gold. My father returned from New Orleans in January. On board the steamer coming up the Mississippi river, he had fallen in with some gentlemen "returning to the States." They had given him a glowing description of the "land of gold," and almost the first words spoken after the family greetings were over was, "We are going to California in the spring." My mother was more than agreeable and from that time nothing was talked or thought of but the journey to California. The old refrain was sung from morning to night,

"In the spring we 're going to journey,   Far away to California."

My chum, Tant, a negro boy of my own age, and I seriously discussed the prospects and dangers of the journey. Direful tales of the tomahawk and scalping knife were recounted by the older children. But Tant's fears were allayed by the assurance that the "Injuns" would not kill and scalp a black boy with a woolly head. For once in my life I envied that imp of darkness.

In February a gentleman came to our home and after dinner he and my father rode over the plantation. The next morning they rode over to Bolliver, the county seat. Returning in the evening my father announced that the plantation was sold. Then began the real preparations for the journey. My father was constantly in the saddle. Oxen, wagons, ox yokes, ox bows, cattle, covers for wagons, arms, ammunition and provisions were purchased and brought to the plantation. All was hurry and excitement. Two shoemakers came to our home to make up the leather purchased at St. Louis or from neighboring tanneries. Meantime Aunt Ann and the older girls of the family were busy spinning and weaving....