Religion & Sex Studies in the Pathology of Religious Development 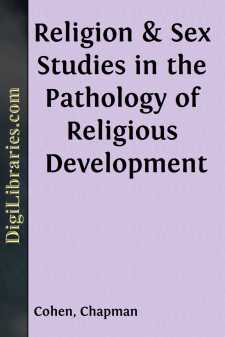 In spite of all that has been done in the way of applying scientific principles to religious ideas, there is much that yet remains to be accomplished. Generally speaking science has only dealt with the subject of religion in its more normal and more regularised forms. The last half-century has produced many elaborate and fruitful studies of the origin of religious ideas, while comparative mythology has shown a close and suggestive relationship between creeds and symbols that were once believed to have nothing in common. But beyond these fields of research there is at least one other that has hitherto been denied the attention it richly deserves. When the anthropologist has described those conditions of primitive culture amid which he believes religious ideas took their origin, and the comparative mythologist has shown us the similarities and inter-relations of widely separated creeds, religious beliefs have yet to submit to the test of a scientific psychology, the function of which is to determine how far the same principles apply to all phases of mental life whether religious or non-religious. Moreover, in addition to the normal psychical life of man, there is that vast borderland in which the normal merges into the abnormal, and the healthy state into a pathologic one. That there is a physiology of religion is now generally admitted; but that there is also a pathology of religion is not so generally recognised. The present work seeks to emphasise this last aspect. It does not claim to be more than an outline of the subject—a sketch map of a territory that others may fill in more completely.

From another point of view the following pages may be regarded as an attempt more completely to apply scientific principles to religious beliefs. And it would be idle to hope that such an attempt could be made without incurring much hostile criticism. In connection with most other subjects the help of science is welcomed; in connection with religion science is still regarded as more or less of an intruder, profaning a sacred subject with vulgar tests and impertinent enquiries. This must almost inevitably follow when one has to face the opposition of thousands of men who have been trained to regard themselves as the authorised exponents of all that pertains to religion, but whose training fails to supply them with a genuine scientific equipment. It should, however, be clear that an attitude of hostility to science, veiled or open, cannot be maintained. Mere authority has fallen on evil days, and in all directions is being freely challenged. There is increasing dislike to systems of thought that shrink from examination, and to conclusions that cannot withstand the most rigorous investigation. And if science really has anything of value to say on this question it cannot be held to silence for ever. Sooner or later the need for its assistance will be felt, and the self-elected authority of an order must give way. It is, moreover, impossible for science with its claim, sometimes avowed, but always implied, to cover the whole of life, to forego so large a territory as that of religion....