Religion and Lust or, The Psychical Correlation of Religious Emotion and Sexual Desire 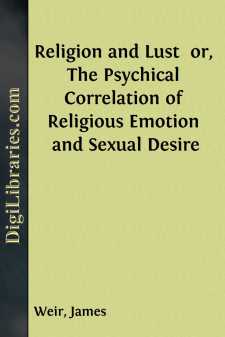 I believe that man originated his first ideas of the supernatural from the external phenomena of nature which were perceptible to one or more of his five senses; his first theogony was a natural one and one taken directly from nature. In ideation the primal bases of thought must have been founded, ab initio, upon sensual perceptions; hence, must have been materialistic and natural. Spencer, on the contrary, maintains that in man, “the first traceable conception of a supernatural being is the conception of a ghost.”

Primitive man’s struggle for existence was so very severe that his limited sagacity was fully occupied in obtaining food and shelter; many thousands of years must have passed away before he evolved any idea of weapons other than stones and clubs. When he arrived at a psychical acuteness that originated traps, spears, bows and arrows, his struggle for existence became easier and he had leisure to notice the various natural phenomena by which he was surrounded. Man evolved a belief in a god long before he arrived at a conception of a ghost, double, or soul. He soon discovered that his welfare was mainly dependent on nature, consequently he began to propitiate nature, and finally ended by creating a system of theogony founded on nature alone.

“It is an evident historical fact that man first personified natural phenomena, and then made use of these personifications to personify his own inward acts, his psychical ideas and conceptions. This was the necessary process, and external idols were formed before those which were internal and peculiar to himself.” Sun, moon, and star; mountain, hill, and dale; torrent, waterfall, and rill, all became to him distinct personalities, powerful beings, that might do him great harm or much good. He therefore endeavored to propitiate them, just as a dog endeavors to get the good will of man by abjectly crawling toward him on his belly and licking his feet. There was no element of true worship in the propitiatory offerings of primitive man; in the beginning he was essentially a materialist—he became a spiritualist later on. Man’s first religion must have been, necessarily, a material one; he worshiped (propitiated) only that which he could see, or feel, or hear, or touch; his undeveloped psychical being could grasp nothing higher; his limited understanding could not frame an idea involving a spiritual element such as animism undoubtedly presents. Apropos of the dream birth of the soul, all terrestrial mammals dream, and in some of them, notably the dog and monkey, an observer can almost predicate the subject of their dreams by watching their actions while they are under dream influence; yet no animal save man, as far as we know, has ever evolved any idea of ghost or soul. It may be said, on the other hand, that since animals show, unmistakably, that they are, in a measure, fully conscious of certain phenomena in the economy of nature, and while I am not prepared to state that any element of worship enters into their regard, I yet believe that an infinitesimal increase in the development of their psychical beings would, undoubtedly, lead some of them to a natural religion such as our pithecoid ancestors practiced.

The Egyptians noticed, over four thousand years ago, that cynocephali, the dog-headed apes of the Nile Valley, were in the habit of welcoming the rising sun with dancing and with howls of joy! “The habit of certain monkeys (cynocephali) assembling, as it were, in full court, and chattering noisily at sunrise and sunset, would almost justify the, as yet, uncivilized Egyptians in intrusting them with the charge of hailing the god morning and evening as he appeared in the east or passed away in the west.” An English fox-terrier of my acquaintance is very much afraid of thunder or any noise simulating thunder....