Relativity : the Special and General Theory 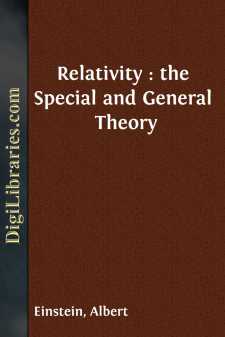 In your schooldays most of you who read this book made acquaintance with the noble building of Euclid's geometry, and you remember — perhaps with more respect than love — the magnificent structure, on the lofty staircase of which you were chased about for uncounted hours by conscientious teachers. By reason of our past experience, you would certainly regard everyone with disdain who should pronounce even the most out-of-the-way proposition of this science to be untrue. But perhaps this feeling of proud certainty would leave you immediately if some one were to ask you: "What, then, do you mean by the assertion that these propositions are true?" Let us proceed to give this question a little consideration.

Geometry sets out form certain conceptions such as "plane," "point," and "straight line," with which we are able to associate more or less definite ideas, and from certain simple propositions (axioms) which, in virtue of these ideas, we are inclined to accept as "true." Then, on the basis of a logical process, the justification of which we feel ourselves compelled to admit, all remaining propositions are shown to follow from those axioms, i.e. they are proven. A proposition is then correct ("true") when it has been derived in the recognised manner from the axioms. The question of "truth" of the individual geometrical propositions is thus reduced to one of the "truth" of the axioms. Now it has long been known that the last question is not only unanswerable by the methods of geometry, but that it is in itself entirely without meaning. We cannot ask whether it is true that only one straight line goes through two points. We can only say that Euclidean geometry deals with things called "straight lines," to each of which is ascribed the property of being uniquely determined by two points situated on it. The concept "true" does not tally with the assertions of pure geometry, because by the word "true" we are eventually in the habit of designating always the correspondence with a "real" object; geometry, however, is not concerned with the relation of the ideas involved in it to objects of experience, but only with the logical connection of these ideas among themselves.

It is not difficult to understand why, in spite of this, we feel constrained to call the propositions of geometry "true." Geometrical ideas correspond to more or less exact objects in nature, and these last are undoubtedly the exclusive cause of the genesis of those ideas. Geometry ought to refrain from such a course, in order to give to its structure the largest possible logical unity. The practice, for example, of seeing in a "distance" two marked positions on a practically rigid body is something which is lodged deeply in our habit of thought. We are accustomed further to regard three points as being situated on a straight line, if their apparent positions can be made to coincide for observation with one eye, under suitable choice of our place of observation....