Reincarnation A Study in Human Evolution 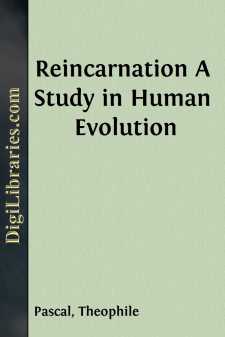 SKETCH OF THE AUTHOR'S LIFE.

Théophile Pascal was born on the 11th of May, 1860, at Villecroze, a village in the South of France. His childhood was spent amid the pleasant surroundings of a country life. Shortly after his sixteenth birthday, a relative of his, a Catholic priest ministering in Toulon, seeing that the youth showed considerable ability, sent for him and presided over his studies in this large maritime centre. Before many years elapsed, he entered the Naval Medical School of the town, which he left at the age of twenty-two, with first-class honours. In his professional capacity, he took several trips on vessels belonging to the Mediterranean squadron. Four years afterwards he married, resigned active naval service, and devoted himself to building up a practice on land, becoming a homoeopathic physician in the great seaport itself. It was about this time that the young doctor became interested in Theosophy, owing to the kindly services of a former patient, Commander Courmes. The closest friendship and sympathetic interest in theosophic thought thus began, and continued during their common labours subsequently in Paris, Dr. Pascal entered the Theosophical Society in 1891, and during the course of the following year wrote a series of articles for the Revue Théosophique Française. These were continued year after year, and dealt with the most varied subjects: Psychic Powers; The Fall of the Angels; Kâma-Manasic Elementals; Thought Forms; Christianity, Prehistoric Races, and many others.

The young doctor had previously made a deep study of human magnetism, which proved a most fertile ground for the sowing of the seed of the Ancient Wisdom.

In 1898 attacks of serious nervous depression became frequent, forcing him to cease work of every kind. Mrs. Besant persuaded him to accompany her to India, where his general health was gradually restored, and he was enabled to return to France in the following year.

He decided to leave Toulon, where he had built up a considerable practice, and to settle in Paris, hoping to provide for the needs of himself and his family—his wife and only daughter—by the exercise of his profession, and at the same time to fight the good fight for Theosophy in the capital itself.

The French Section of the Theosophical Society was founded in 1900, and Dr. Pascal was elected General Secretary. Throughout the next two years a number of thoughtful articles and publications appeared from his pen. The incessant labour and attention, however, which he bestowed on the spreading of theosophic instruction began to have its effect on a naturally delicate constitution, and in July, 1902, when attending the meetings of the British Convention in London, he was prostrated by an attack of congestion of the brain. The most devoted care was lavished on him, both in London and in Paris, the result being that a rapid, though only temporary, recovery took place. Had he relaxed his efforts somewhat, the cure might have been a permanent one, but Dr. Pascal, with the penetrating vision of the mystic, saw how pressing were the needs of the age, and how few the pioneers of this new presentation of the Truth, so that, at whatever cost of personal sacrifice, he plunged once more into the midst of his arduous toil.

In 1903 a series of very fine articles on the Laws of Destiny appeared in the Revue Théosophique, to be followed immediately by publication in volume form. Two years afterwards appeared the present volume—Reincarnation: A Study in Human Evolution; a work considered the most complete of any that have so far appeared in France on this subject, and the most popular of Dr. Pascal's publications.

In 1906 some of the nerve centres controlling the organs of speech became affected, but not sufficiently to compel him to remain absent from the International Theosophical Congress held that year in Paris under the presidency of Colonel Olcott. It was on this occasion that Dr. Pascal received from the hands of the President-Founder the Subba Rao medal, awarded to members of the society whose literary labours in the promulgation of the truths of Theosophy have proved eminently useful....