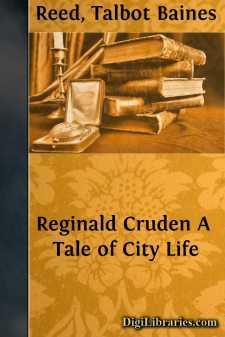 It was a desperately hot day. There had been no day like it all the summer. Indeed, Squires, the head gardener at Garden Vale, positively asserted that there had been none like it since he had been employed on the place, which was fourteen years last March. Squires, by the way, never lost an opportunity of reminding himself and the world generally of the length of his services to the family at Garden Vale; and on the strength of those fourteen years he gave himself airs as if the place belonged not to Mr Cruden at all, but to himself. He was the terror of his mistress, who scarcely dared to peep into a greenhouse without his leave, and although he could never exactly obtain from the two young gentlemen the respect to which he considered himself entitled, he still flattered himself in secret “they couldn’t do exactly what they liked with his garden!”

To-day, however, it was so hot that even Squires, after having expressed the opinion on the weather above mentioned, withdrew himself into the coolest recess of his snug lodge and slept sweetly, leaving the young gentlemen, had they been so minded, to take any liberty they liked with “his” garden.

The young gentlemen, however, were not so minded.

They had been doing their best to play lawn tennis in the blazing sun with two of their friends, but it was too hot to run, too hot to hit, and far too hot to score, so the attempt had died away, and three of them now reclined on the sloping bank under the laurel hedge, dividing their time between lazily gazing up at the dark-blue sky and watching the proceedings of the fourth of their party, who still remained in the courts.

This last-mentioned youth, who, to judge by his countenance, was brother to one of those who lolled on the bank, presented a curious contrast to the general languor of the afternoon. Deserted by his companions in the sport, he was relieving himself of some of his superfluous energy by the novel diversion of playing tennis with himself. This he accomplished by serving the ball high up in the air and then jumping the net, so as to take it on the other side, following up his return by another leap over the net, and so on till either he or the ball came to grief. On an ordinary day the exertion involved in this pastime would be quite enough for any ordinary individual, but on a day like the present, with the thermometer at ninety in the shade, it was a trifle too much even to watch.

“For goodness’ sake shut up, Horrors,” said the elder brother. “We might as well be playing ourselves as watch you at that sort of thing.”

The young gentleman addressed as Horrors was at that moment in the midst of one of his aerial flights, and had neither leisure nor breath to answer.

“Do you hear?” repeated the other. “If you want to keep warm, go indoors and put on a great-coat, but don’t fag us to death with that foolery.”

“Eight!” exclaimed the young athlete, scoring the number of times the ball had crossed the net, and starting for another jump....