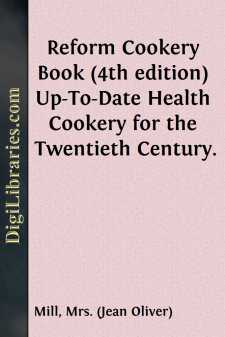 The following directions will be found generally applicable, so that there will be no need to repeat the several details each time. Seasonings are not specified, as these are a matter of individual taste and circumstance. Some from considerations of health or otherwise are forbidden the use of salt. In such cases a little sugar will help to bring out the flavour of the vegetables, but unless all the members of the household are alike, it had best not be added before bringing to table. Where soup is to be strained, whole pepper, mace, &c., is much preferable to ground, both as being free from adulteration, and giving all the flavour without the grit. The water in which cauliflower, green peas, &c., have been boiled, should be added to the stock-pot, but as we are now recognising that all vegetables should be cooked as conservatively as possible—that is, by steaming, or in just as much water as they will absorb, so as not to waste the valuable salts and juices, there will not be much of such liquid in a "Reform" menage. A stock must therefore be made from fresh materials, but as those are comparatively inexpensive, we need not grudge having them of the freshest and best. Readers of Thackeray will remember the little dinner at Timmins, when the hired chef shed such consternation in the bosom of little Mrs Timmins by his outrageous demands for 'a leg of beef, a leg of veal, and a ham', on behalf of the stock-pot. But the 'Reform' housekeeper need be under no apprehension on that score, for she can have the choicest and most wholesome materials fresh from the garden to her pot-au-feu, at a trifling cost. Of course it is quite possible to be as extravagant with vegetarian foods as with the other, as when we demand forced unnatural products out of their season, when their unwholesomeness is matched only by their cost. No one who knows what sound, good food really is, will dream of using manure-fed tomatoes, mushrooms at 3s. per lb.; or stringy tough asparagus, at 5s. or 10s. a bunch, when seasonable products are to be had for a few pence.

The exact quantities are not always specified either, in the following recipes, as that too has to be determined by individual requirement, but as a general rule they will serve four to six persons. The amount of vegetables, &c., given, will be in proportion to 3 pints, i.e. 12 gills liquid. Serve all soups with croutons of toast or fried bread.

The best stock for white soups is made from small haricots. Take 1 lb. of these, pick and wash well, throwing away any that are defective, and if there is time soak ten or twelve hours in cold water; put on in clean saucepan—preferably earthenware or enamelled—along with the water in which soaked (if not soaked scald with boiling water, and put on with fresh boiling water), some of the coarser stalks of celery, one or two chopped Spanish onions, blade of mace, and a few white pepper-corns. If celery is out of season, a little celery seed does very well. Bring to boil, skim, and cook gently for at least two hours....