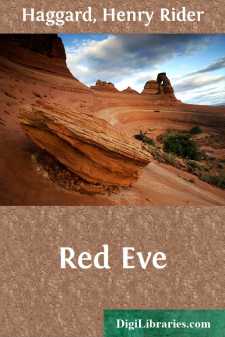 They knew nothing of it in England or all the Western countries in those days before Crecy was fought, when the third Edward sat upon the throne. There was none to tell them of the doom that the East, whence come light and life, death and the decrees of God, had loosed upon the world. Not one in a multitude in Europe had ever even heard of those vast lands of far Cathay peopled with hundreds of millions of cold-faced yellow men, lands which had grown very old before our own familiar states and empires were carved out of mountain, of forest, and of savage-haunted plain. Yet if their eyes had been open so that they could see, well might they have trembled. King, prince, priest, merchant, captain, citizen and poor labouring hind, well might they all have trembled when the East sent forth her gifts!

Look across the world beyond that curtain of thick darkness. Behold! A vast city of fantastic houses half buried in winter snows and reddened by the lurid sunset breaking through a saw-toothed canopy of cloud. Everywhere upon the temple squares and open spaces great fires burning a strange fuel—the bodies of thousands of mankind. Pestilence was king of that city, a pestilence hitherto unknown. Innumerable hordes had died and were dying, yet innumerable hordes remained. All the patient East bore forth those still shapes that had been theirs to love or hate, and, their task done, turned to the banks of the mighty river and watched.

Down the broad street which ran between the fantastic houses advanced a procession toward the brown, ice-flecked river. First marched a company of priests clad in black robes, and carrying on poles lanterns of black paper, lighted, although the sun still shone. Behind marched another company of priests clad in white robes, and bearing white lanterns, also lighted. But at these none looked, nor did they listen to the dirges that they sang, for all eyes were fixed upon him who filled the centre space and upon his two companions.

The first companion was a lovely woman, jewel-hung, wearing false flowers in her streaming hair, and beneath her bared breasts a kirtle of white silk. Life and love embodied in radiance and beauty, she danced in front, looking about her with alluring eyes, and scattering petals of dead roses from a basket which she bore. Different was the second companion, who stalked behind; so thin, so sexless that none could say if the shape were that of man or woman. Dry, streaming locks of iron-grey, an ashen countenance, deep-set, hollow eyes, a beetling, parchment-covered brow; lean shanks half hidden with a rotting rag, claw-like hands which clutched miserably at the air. Such was its awful fashion, that of new death in all its terrors.

Between them, touched of neither, went a man, naked save for a red girdle and a long red cloak that was fastened round his throat and hung down from his broad shoulders. There was nothing strange about this man, unless it were perhaps the strength that seemed to flow from him and the glance of his icy eyes....