Records of Woodhall Spa and Neighbourhood Historical, Anecdotal, Physiographical, and Archaeological, with Other Matter 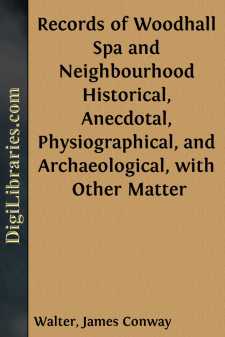 CHAPTER I.  THE HISTORY OF THE WELL.

It has been remarked that the discovery of many of our medicinal springs has been due to some romantic incident, or, in other cases, to some occurrence partaking almost of the ludicrous.  At the famed Carlsbad, for instance, a princely hunter pursues his stag into the lake where it has sought refuge, whereupon the unusual cries of his hounds, too eagerly breasting the waters, speedily reveal to him the strongly thermal nature of the spring which feeds the lake, and the discovery has benefited the thousands who annually frequent that health-giving resort from almost every land.  On the other hand, in the case of our own Bath, although well known to the ancient Romans—as also in the later case of Bolsover—tradition avers that an unhealthy pig, instinctively “wallowing in the mire” produced by the oozing spring, and emerging from the uncleanly bath cured of its ailment, was the humble instrument to demonstrate the health-restoring power of the water, to the subsequent advantage of suffering humanity.  Other cases, more or less legendary, might be adduced; let these suffice.

The discovery, however, of the Woodhall water, if leas romantic, is no myth, shrouded in the mystery of a distant past, since it has the advantage of being, comparatively, of so recent a date, that the historian can consult the contemporary testimony of eyewitnesses still living, or of those to whom others have related the particulars from their own personal knowledge.  The following account has been thus collected, and put into connected form:—

In the early years of this 19th century there lived a certain John Parkinson, Esquire, a scion of a family of position and wealth in the county, who owned, with other property, the estate of Woodhall.   Being of a speculative and enterprising bent of mind, it is said that he became enamoured of three ideas or projects, which he thought he had the means and opportunity of carrying out.  One of these was to sink a coal mine, a second was to plant a forest, and a third was to build a city.  For the last purpose he purchased from the Crown a tract of fenland, situated between Revesby and Boston, being an outlying allotment of the original ancient parish of Bolingbroke.  Here be built (about 1816) a street of houses, which he named New Bolingbroke.  The speculation, however, proved a failure, probably owing to the loneliness of the position; and it was not till several years later, when the property had passed into the possession of J. Banks Stanhope, Esq., of Revesby Abbey, who spent much money on needed improvements, that the new “city” became a fairly populous village, as it is at the present time.

Mr. Parkinson’s second project was the planting of a forest.  For this purpose he secured a large tract of waste moorland, in the parishes of Roughton and Kirkby, lying to the south of the present road to Horncastle, and within some two miles eastward of Woodhall Spa.  This land he planted extensively with fir and oak, and in course of time they became a dense wood.  This growth has since then been largely destroyed by fire, or has yielded to the woodman’s axe, and at the present time there are left not more than forty acres of the original “forest,” the rest being chiefly open moor, the whole going by the name of “Ostler’s Plantations,” Mr. Ostler being the agent employed in the work and becoming himself (as will be seen) eventually the proprietor.  Thus of two eggs which Mr. Parkinson brooded over, and desired to hatch, one may be said to have been addled, and the other did not prove useful to himself:—

The best laid plans of mice and menGang aft agley.

We now come to the third “incubation,” which has, it may fairly be said, proved (though once more, not to himself) a “golden egg.”  It has been observed that he had conceived the idea of searching for coal.  For this purpose he selected a spot which has since become the site of the Woodhall well.  It is said that he was guided in this by the advice of a Mr. J. Clarkson, residing at that time at Moorby, not far from his residence at Bolingbroke, and who had had some previous experience among the Yorkshire coal mines.  The boring was begun in the year 1811, and was carried on under the supervision of Mr. Clarkson.  When the shaft had reached a depth of about 540ft., there occurred an inrush of clear, salt water, which compelled the excavators to retreat.  The work was, however, afterwards resumed, a brick conduit for the water being constructed, and so, at the cost of great labour, and by shifts of men working day and night, without intermission, a depth of over 1,000ft. was attained.  It is said (we know not with what truth) that Mr. Parkinson and his agent were induced to go on with the boring to this extent, because the men brought up in their pockets fragments of coal (which they had of course themselves taken down), and the hopes of success were thus buoyed up.  When, however, this depth of 1,000ft....