Recollections of the Private Life of Napoleon - Complete 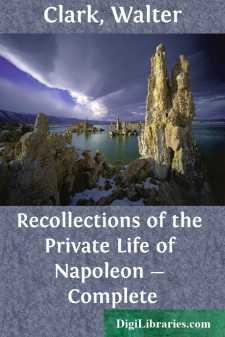 Though this work was first published in 1830, it has never before been translated into English. Indeed, the volumes are almost out of print. When in Paris a few years ago the writer secured, with much difficulty, a copy, from which this translation has been made. Notes have been added by the translator, and illustrations by the publishers, which, it is believed, will enhance the interest of the original work by Constant.

"To paint Caesar in undress is not to paint Caesar," some one has said. Yet men will always like to see the great 'en deshabille'. In these volumes the hero is painted in undress. His foibles, his peculiarities, his vices, are here depicted without reserve. But so also are his kindness of heart, his vast intellect, his knowledge of men, his extraordinary energy, his public spirit. The shutters are taken down, and the workings of the mighty machinery are laid bare.

The late Prince Napoleon (who was more truly "the nephew of his uncle" than was Napoleon III.), in his Napoleon and His Detractors, bitterly assails this work of Constants attacking both its authenticity and the correctness of its statements. But there appears no good reason to doubt its genuineness, and the truthfulness of many of its details is amply supported by other authorities. Notwithstanding its excesses and follies, the great French Revolution will ever have an absorbing interest for mankind, because it began as a struggle for the advancement of the cause of manhood, liberty, and equal rights. It was a terribly earnest movement; and, after the lapse of a century, interest continues unabated in the great soldier who restored order, and organized and preserved the new ideas by means of his Civil Code and a firm government.

Countless memoirs have been published by those who lived in those heroic times. Yet everything which will cast new light upon the chief actors in that great drama of humanity is still seized upon with avidity, especially whatever concerns the Emperor.

This is not merely because he was a great conqueror; for such were, after their fashion, Genghis Khan and Timour, and hundreds of others. But it is because of the human interest which attaches to the wonderful career of Napoleon and the events of which he was the central figure.

Never did poet or novelist imagine scenes so improbable. The son of an obscure lawyer in an unimportant island becomes Emperor of the French and King of Italy. His brothers and sisters become kings and queens. The sons of innkeepers, notaries; lawyers, and peasants become marshals of the empire. The Emperor, first making a West India Creole his wife and Empress, puts her away, and marries a daughter of the haughtiest and oldest royal house in Europe, the niece of a queen whom the people of France had beheaded a few years before. Their son is born a king—King of Rome. Then suddenly the pageantry dissolves, and Emperor, kings, and queens become subjects again. Has imagination ever dreamed anything wilder than this? The dramatic interest of this story will always attract, but there is a deeper one....