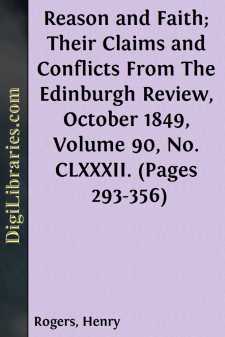 REASON AND FAITH; THEIR CLAIMS AND CONFLICTS.

'Reason and Faith,' says one of our old divines, with the quaintness characteristic of his day, 'resemble the two sons of the patriarch; Reason is the firstborn, but Faith inherits the blessing. The image is ingenious, and the antithesis striking; but nevertheless the sentiment is far from just. It is hardly right to represent Faith as younger than reason: the fact undoubtedly being, that human creatures trust and believe, long before they reason or know. But the truth is, that both reason and Faith are coeval with the nature of man, and were designed to dwell in his heart together. In truth they are, and were, and, in such creatures as ourselves, must be, reciprocally complementary—neither can exclude the other. It is as impossible to exercise an acceptable faith without reason for so exercising it,—that is, without exercising reason while we exercise faith*,—as it is to apprehend by our reason, exclusive of faith, all the truths on which we are daily compelled to act, whether in relation to this world or the next. Neither is it right to represent either of them as failing of the promised heritage, except as both may fail alike, by perversion from their true end, and depravation of their genuine nature; for it to the faith of which the New Testament speaks so much, a peculiar blessing is promised, it is evident from the same volume that it is not a 'faith without reason' any more than a 'faith without works,' which is approved by the Author of Christianity. And this is sufficiently proved by the injunction 'to be ready to give a reason for the hope,'—and therefore for the faith,—'which is in us.'

* Let it be said that we are here playing upon an ambiguity in the word Reason;—considered in the first clause as an argument; and in the second, as the characteristic endowment of our species. The distinction between Reason and Reasoning (though most important) does not affect our statement; for though Reason may be exercised where there is no giving of reasons, there can be no giving of reasons without the exercise of Reason.

If, therefore, we were to imitate the quaintness of the old divine, on whose dictum we have been commenting, we should rather compare Reason and Faith to the two trusty spies, 'faithful amongst the 'faithless,' who confirmed each other's report of 'that good land which flowed with milk and honey,' and to both of whom the promise of a rich inheritance there was given,—and, in due time, amply redeemed....