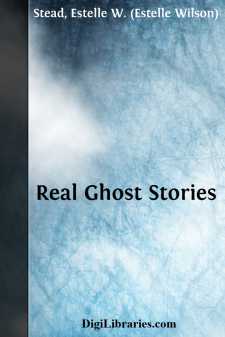 During the last few years I have been urged by people in all parts of the world to re-issue some of the wonderful stories of genuine psychic experiences collected by my Father several years ago.

These stories were published by him in two volumes in 1891-92; the first, entitled Real Ghost Stories, created so much interest and brought in so large a number of other stories of genuine experiences that the first volume was soon followed by a second, entitled More Ghost Stories.

The contents of the two volumes, slightly curtailed, were, a few years later, brought out as one book; but the three volumes have long been out of print and are practically unknown to the present generation.

I remember when I was a child my Father read some of these stories aloud to us as he was making his collection; and I remember, too, how thrilled and awed we were, and how at times they brought a creepy feeling when at night I had to mount many flights of stairs to my bedroom at the top of the house.

Reading these stories again, after many years' study of the subject, I have realised what a wealth of interesting facts my Father had gathered together, and that not only the gathered facts, but his own contributions, his chapter on "The Ghost That Dwelleth in Each One of Us" and his comments on the stories, show what an insight he had into and what an understanding he had of this vast and wonderful subject.

I felt as I read that those who urged re-publication were right, that if not a "classic," as some have called it, it at least merits a place on the shelves of all who study psychic literature and are interested in psychic experiences.

I demurred long as to whether I should change the title. The word "Ghost" has to a great extent in modern times lost its true meaning to the majority and is generally associated in many minds with something uncanny—with haunted houses and weird apparitions filling with terror those who come into contact with them.

"Stories from the Borderland," "Psychic Experiences," were among the titles which suggested themselves to me; but in the end I decided to keep the old title, and in so doing help to bring the word "ghost" back to its proper and true place and meaning.

"Ghost," according to the dictionary, means "the soul of man; the soul of a deceased person; the soul or spirit separate from the body; apparition, spectre, shadow":—it comprises, in fact, all we mean when we think or speak of "Spirit." We still say "The Holy Ghost" as naturally and as reverently as we say "The Holy Spirit." So for the sake of the word itself, and because it covers everything we speak of as Spirit to-day; these two considerations take away all reason why the word should not be used, and it gives me great pleasure in re-issuing these stories to carry on the title originally chosen by my Father.

There is a large collection of stories to be drawn upon, for besides those given in the two volumes mentioned, many of equal interest and value appeared in Borderland, a psychic quarterly edited and published by my Father for a period of four years in the nineties and now long out of print....