Randy of the River The Adventures of a Young Deckhand 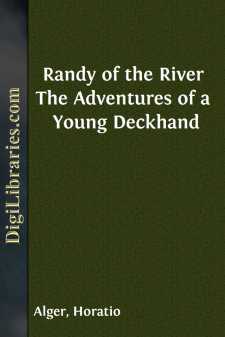 "I am going fishing, Randy. Do you want to go along?"

"With pleasure, Jack," answered Randy Thompson, a bright, manly youth of fourteen. "Are you going on foot or in your boat?"

"I think we might as well take the boat," returned Jack Bartlett, a boy who was but a few months older than Randy. "Have you your lines handy?"

"No, but I can get them in less than ten minutes."

"All right. Meet me at the dock in quarter of an hour. I was thinking of going up the river to Landy's Hole. That's a good spot, isn't it?"

"I think so. Last season I was up there and caught fourteen good-sized fish."

"They tell me you are one of the best fishermen in Riverport, Randy," went on Jack Bartlett, admiringly. "What is the secret of your success?"

"I don't know unless it is patience," answered Randy, with a broad smile. "To catch fish you must be patient. Now when I caught my mess of fourteen two other boys were up to the Hole. But just because the fish did not bite right away they moved away, further up the river. But by doing that they got only about half as many as myself."

"Well, I am willing to be patient if I know I am going to catch something."

At this Randy laughed outright.

"You can't be sure of anything—in fishing. But I always reckon it's a good thing to hold on and give a thing a fair trial."

"I reckon you're right, Randy, and I'll give the fishing a fair trial to-day," answered Jack Bartlett. "Remember, the dock in quarter of an hour," he added, as he moved away.

"I'll be on hand—unless mother wants me to do something for her before I go away," returned Randy.

Randy, or rather Randolph, Thompson, to use his right name, was the only son of Louis Thompson, a carpenter of Riverport, a thriving town in one of our eastern states. Randy had no brothers or sisters, and lived with his father and mother in a modest cottage on one of the side roads leading to the hills back of the town. Randy was a scholar in the local school, standing close to the head of his class. It was now summer time and the institution of learning was closed, so the boy had most of his time to himself.

He had wanted to go to work, to help his father, who had some heavy doctors' bills to pay, but his parents had told him to take at least two weeks' vacation before looking for employment.

"He needs it," Mrs. Thompson had said to her husband. "He has applied himself very closely to his studies ever since last fall."

"Well, let him take the vacation and welcome," answered Louis Thompson. "I know when I was a boy I loved a vacation." He was a kind-hearted man and thought a good deal of his offspring and also of his wife, who was devoted to him.

The cottage stood back in the center of a well-kept garden, where Mrs. Thompson had spent much time over her flowers, of which she was passionately fond. It was a two-story affair, containing but five rooms, yet it was large enough for the family, and Randy, who had never known anything better, considered it a very good home. There was a small white fence in front, with a gate, and the path to the front stoop was lined with geraniums....