Rambles and Recollections of an Indian Official 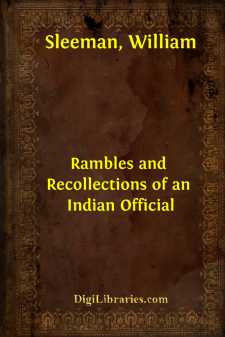 The Rambles and Recollections of an Indian Official, always a costly book, has been scarce and difficult to procure for many years past. Among the crowd of books descriptive of Indian scenery, manners, and customs, the sterling merits of Sir William Sleeman's work have secured it pre-eminence, and kept it in constant demand, notwithstanding the lapse of nearly fifty years since its publication. The high reputation of this work does not rest upon its strictly literary qualities. The author was a busy man, immersed all his life in the practical affairs of administration, and too full of his subject to be careful of strict correctness of style or minute accuracy of expression. Yet, so great is the intrinsic value of his observations, and so attractive are the sincerity and sympathy with which he discusses a vast range of topics, that the reader refuses to be offended by slight formal defects in expression or arrangement, and willingly yields to the charm of the author's genial and unstudied conversation.

It would be difficult to name any other book so full of instruction for the young Anglo-Indian administrator. When this work was published in 1844 the author had had thirty-five years' varied experience of Indian life, and had accumulated and assimilated an immense store of knowledge concerning the history, manners, and modes of thought of the complex population of India. He thoroughly understood the peculiarities of the various native races, and the characteristics which distinguish them from the nations of Europe; while his sympathetic insight into Indian life had not orientalized him, nor had it ever for one moment caused him to forget his position and heritage as an Englishman. This attitude of sane and discriminating sympathy is the right attitude for the Englishman in India.

To enumerate the topics on which wise and profitable observations will be found in this book would be superfluous. The wine is good, and needs no bush. So much may be said that the book is one to interest that nondescript person, the general reader in Europe or America, as well as the Anglo-Indian official. Besides good advice and sound teaching on matters of policy and administration, it contains many charming, though inartificial, descriptions of scenery and customs, many ingenious speculations, and some capital stories. The ethnologist, the antiquary, the geologist, the soldier, and the missionary will all find in it something to suit their several tastes.