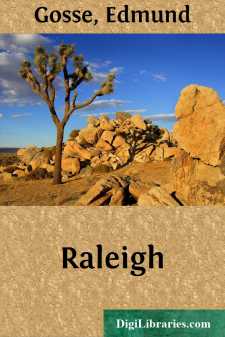 Walter Raleigh was born, so Camden and an anonymous astrologer combine to assure us, in 1552. The place was Hayes Barton, a farmstead in the parish of East Budleigh, in Devonshire, then belonging to his father; it passed out of the family, and in 1584 Sir Walter attempted to buy it back. 'For the natural disposition I have to the place, being born in that house, I had rather seat myself there than anywhere else,' he wrote to a Mr. Richard Duke, the then possessor, who refused to sell it. Genealogists, from himself downwards, have found a rich treasure in Raleigh's family tree, which winds its branches into those of some of the best Devonshire houses, the Gilberts, the Carews, the Champernownes. His father, the elder Walter Raleigh, in his third marriage became the second husband of Katherine Gilbert, daughter of Sir Philip Champernoun of Modbury. By Otto Gilbert, her first husband, she had been the mother of two boys destined to be bold navigators and colonists, Humphrey and Adrian Gilbert. It, is certainly the influence of his half-brother Sir Humphrey Gilbert, of Compton, which is most strongly marked upon the character of young Raleigh; while Adrian was one of his own earliest converts to Virginian enterprise.

The earliest notice of Sir Walter Raleigh known to exist was found and communicated to the Transactions of the Devonshire Association by Dr. Brushfield in 1883. It is in a deed preserved in Sidmouth Church, by which tithes of fish are leased by the manor of Sidmouth to 'Walter Rawlegh the elder, Carow Ralegh, and Walter Ralegh the younger,' on September 10, 1560. In 1578 the same persons passed over their interest in the fish-titles in another deed, which contains their signatures. It is amusing to find that the family had not decided how to spell its name. The father writes 'Ralegh,' his elder son Carew writes 'Caro Rawlyh,' while the subject of this memoir, in this his earliest known signature, calls himself 'Rauleygh.'

His father was a Protestant when young Walter was born, but his mother seems to have remained a Catholic. In the persecution under Mary, she, as we learn from Foxe, went into Exeter to visit the heretics in gaol, and in particular to see Agnes Prest before her burning. Mrs. Raleigh began to exhort her to repentance, but the martyr turned the tables on her visitor, and urged the gentlewoman to seek the blessed body of Christ in heaven, not on earth, and this with so much sweet persuasiveness that when Mrs. Raleigh 'came home to her husband she declared to him that in her life she never heard any woman, of such simplicity to see to, talk so godly and so earnestly; insomuch, that if God were not with her she could not speak such things—"I was not able to answer her, I, who can read, and she cannot."' It is easy to perceive that this anecdote would not have been preserved if the incident had not heralded the final secession of Raleigh's parents from the creed of Philip II., and thus Agnes Prest was not without her share in forging Raleigh's hatred of bigotry and of the Spaniard. Very little else is known about Walter and Katherine Raleigh. They lived at their manorial farm of Hayes Barton, and they were buried side by side, as their son tells us, 'in Exeter church.'

The university career of Raleigh is vague to us in the highest degree. The only certain fact is that he left Oxford in 1569. Anthony à Wood says that he was three years there, and that he entered Oriel College as a commoner in or about the year 1568. Fuller speaks of him as resident at Christ Church also. Perhaps he went to Christ Church first as a boy of fourteen, in 1566, and removed to Oriel at sixteen. Sir Philip Sidney, Hakluyt, and Camden were all of them at Oxford during those years, and we may conjecture that Raleigh's acquaintance with them began there. Wood tells us that Raleigh, being 'strongly advanced by academical learning at Oxford, under the care of an excellent tutor, became the ornament of the juniors, and a proficient in oratory and philosophy.' Bacon and Aubrey preserved each an anecdote of Raleigh's university career, neither of them worth repeating here....