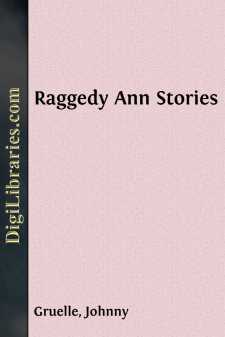 Marcella liked to play up in the attic at Grandma's quaint old house, 'way out in the country, for there were so many old forgotten things to find up there.

One day when Marcella was up in the attic and had played with the old spinning wheel until she had grown tired of it, she curled up on an old horse-hair sofa to rest.

"I wonder what is in that barrel, 'way back in the corner?" she thought, as she jumped from the sofa and climbed over two dusty trunks to the barrel standing back under the eaves.

It was quite dark back there, so when Marcella had pulled a large bundle of things from the barrel she took them over to the dormer window where she could see better. There was a funny little bonnet with long white ribbons. Marcella put it on.

In an old leather bag she found a number of tin-types of queer looking men and women in old-fashioned clothes. And there was one picture of a very pretty little girl with long curls tied tightly back from her forehead and wearing a long dress and queer pantaloons which reached to her shoe-tops. And then out of the heap she pulled an old rag doll with only one shoe-button eye and a painted nose and a smiling mouth. Her dress was of soft material, blue with pretty little flowers and dots all over it.

Forgetting everything else in the happiness of her find, Marcella caught up the rag doll and ran downstairs to show it to Grandma.

"Well! Well! Where did you find it?" Grandma cried. "It's old Raggedy Ann!" she went on as she hugged the doll to her breast. "I had forgotten her. She has been in the attic for fifty years, I guess! Well! Well! Dear old Raggedy Ann! I will sew another button on her right away!" and Grandma went to the machine drawer and got her needle and thread.

Marcella watched the sewing while Grandma told how she had played with Raggedy Ann when she was a little girl.

"Now!" Grandma laughed, "Raggedy Ann, you have two fine shoe-button eyes and with them you can see the changes that have taken place in the world while you have been shut up so long in the attic! For, Raggedy Ann, you have a new playmate and mistress now, and I hope you both will have as much happiness together as you and I used to have!"

Then Grandma gave Raggedy Ann to Marcella, saying very seriously, "Marcella, let me introduce my very dear friend, Raggedy Ann. Raggedy, this is my grand-daughter, Marcella!" And Grandma gave the doll a twitch with her fingers in such a way that the rag doll nodded her head to Marcella.

"Oh, Grandma! Thank you ever and ever so much!" Marcella cried as she gave Grandma a hug and kiss. "Raggedy Ann and I will have just loads of fun."

And this is how Raggedy Ann joined the doll family at Marcella's house, where she began the adventures of Raggedy Ann, told in the following stories.

One day the dolls were left all to themselves.

Their little mistress had placed them all around the room and told them to be nice children while she was away.

And there they sat and never even so much as wiggled a finger, until their mistress had left the room.

Then the soldier dolly turned his head and solemnly winked at Raggedy Ann.

And when the front gate clicked and the dollies knew they were alone in the house, they all scrambled to their feet.

"Now let's have a good time!" cried the tin soldier. "Let's all go in search of something to eat!"

"Yes! Let's all go in search of something to eat!" cried all the other dollies.

"When Mistress had me out playing with her this morning," said Raggedy Ann, "she carried me by a door near the back of the house and I smelled something which smelled as if it would taste delicious!"

"Then you lead the way, Raggedy Ann!" cried the French dolly.

"I think it would be a good plan to elect Raggedy Ann as our leader on this expedition!" said the Indian doll.

At this all the other dolls clapped their hands together and shouted, "Hurrah! Raggedy Ann will be our leader."

So Raggedy Ann, very proud indeed to have the confidence and love of all the other dollies, said that she would be very glad to be their leader.

"Follow me!" she cried as her wobbly legs carried her across the floor at a lively pace....