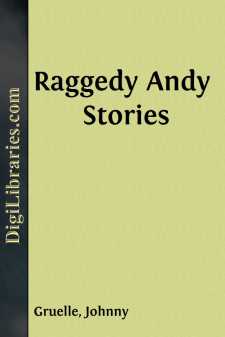 When I saw your Raggedy Ann books and dolls in a store near here, I went right in and bought one of each, and when I had read your introduction to "Raggedy Ann" I went right up to an old trunk in my own attic and brought down the doll I am sending you with this letter.

This doll belonged to my mother and she played with it when a little girl. She treasured it highly, I know, for she kept it until I came and then she gave it to me.

The fun that we two have had together I cannot begin to tell you, but often, like the little boy who went out into the garden to eat worms when all the world seemed blue and clouded, this doll and I went out under the arbor and had our little cry together. I can still feel it's soft rag arms (as I used to imagine) about me, and hear the words of comfort (also imaginary) that were whispered in my ear.

As you say in your Raggedy Ann book, "Fairyland must be filled with rag dolls, soft loppy rag dolls who go through all the beautiful adventures found there, nestling in the crook of a dimpled arm." I truly believe there is such a fairyland and that rag dolls were first made there, or how else could they bring so much sunshine into a child's life?

All the little girls of my acquaintance have your Raggedy Ann book and doll, and for the happiness you have brought to them let me give to you the doll of all my dolls, the doll I loved most dearly.

May it prove to you a gift from Fairyland, bringing with it all the "wish come true" that you may wish and, if possible, add to the sunshine in your life.

My mother called the doll Raggedy Andy and it was by this name that I have always known him. Is it any wonder that I was surprised when I saw the title of your book?

Introduce Raggedy Andy to Raggedy Ann, dear Johnny. Let him share in the happiness of your household.

Your letter brings many pleasant memories to my mind and takes me back to my childhood.

Living next door to us, when I was about four years old, was a little girl named Bessie; I cannot recall her last name. When my mother made Raggedy Ann for me, Bessie's mother made a rag doll for her, for we two always played together; as I recall, there was no fence between our two houses.

We children played with the two rag dolls most of the time until Bessie's family moved away—when I was eight or nine years old. They had faces just alike; the mother who made the first doll probably painted both doll faces. I do not remember just how Raggedy Andy was dressed, but I know he often wore dresses over his boy clothes when Bessie and I decided that he and Raggedy Ann should be sisters for the day.

You will remember I told you about Raggedy Andy long ago, John....