Raftmates A Story of the Great River 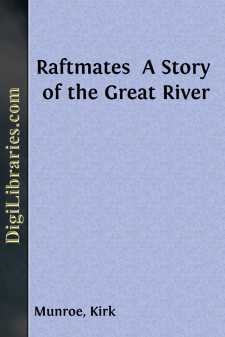 Although the Venture was by no means so large a raft as many that Winn Caspar had watched glide down the Mississippi, he considered it about the finest craft of that description ever put together. He was also a little more proud of it than of anything else in the whole world. Of course he excepted his brave soldier father, who had gone to the war as a private, to come home when it was all over wearing a major's uniform; and his dear mother, who for four weary years had been both father and mother to him, and his sister Elta, who was not only the prettiest girl in the county, but, to Winn's mind, the cleverest. But outside of his immediate family, the raft, the Venture, as his father had named it, was the object of the boy's most sincere admiration and pride. Had he not helped build it? Did he not know every timber and plank and board in it? Had he not assisted in loading it with enough bushels of wheat to feed an army? Was he not about to leave home for the first time in his life, to float away down the great river and out into the wide world on it? Certainly he had, and did, and was. So no wonder he was proud of the raft, and impatient for the waters of the little river, on a bank of which the Caspar's lived, to be high enough to float it, that they might make a start.

Winn had never known any home but this one near the edge of the vast pine forests of Wisconsin. Here Major Caspar had brought his New England bride many years before. Here he had built up a mill business that was promising him a fortune in a few years more at the time when the war called him. When peace was declared, this business was wellnigh ruined, and the soldier must begin life again as a poor man. For many months he struggled, but made little head-way against adverse fortune. The mill turned out lumber fast enough, but there was no demand for it, or those who wanted it were too poor to pay its price. At length the Major decided upon a bold venture. The Caspar mill was but a short distance from the Mississippi. Far away down the great river were cities where money was plenty, and where lumber and farm products were in demand. There were not half enough steamboats on the river, and freights were high; but the vast waterway with its ceaseless current was free to all. Why should not he do as others had done and were constantly doing—raft his goods to a market? It would take time, of course; but a few months of the autumn and winter could be spared as well as not, and so it was finally decided that the venture should be undertaken.

It was not to be a timber raft only. Major Caspar did not care to attempt the navigating of a huge affair, such as his entire stock of sawed material would have made, nor could he afford the expense of a large crew. Then, too, while ready money was scarce in his neighborhood, the prairie wheat crop of that season was unusually good. So he exchanged half his lumber for wheat, and devoted his leisure during the summer to the construction of a raft with the remainder....