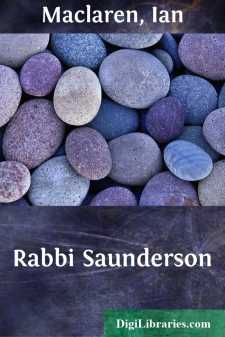 Jeremiah Saunderson had remained in the low estate of a "probationer" for twelve years after he left the Divinity Hall, where he was reported so great a scholar that the Professor of Apologetics spoke to him deprecatingly, and the Professor of Dogmatics openly consulted him on obscure writers. He had wooed twenty-three congregations in vain, from churches in the black country, where the colliers rose in squares of twenty, and went out without ceremony, to suburban places of worship, where the beadle, after due consideration of the sermon, would take up the afternoon notices and ask that they be read at once for purposes of utility, which that unflinching functionary stated to the minister with accuracy and much faithfulness. Vacant congregations desiring a list of candidates, made one exception, and prayed that Jeremiah should not be let loose upon them, till at last it came home to the unfortunate scholar himself that he was an offence and a by-word. He began to dread the ordeal of giving his name, and, as is still told, declared to a household, living in the fat wheatlands and without any imagination, that he was called Magor Missabib. When a stranger makes a statement of this kind to his host with a sad seriousness, no one judges it expedient to offer any remark; but it was skilfully arranged that Missabib's door should be locked from the outside, and one member of the household sat up all night. The sermon next day did not tend to confidence—having seven quotations in unknown tongues—and the attitude of the congregation was one of alert vigilance; but no one gave any outward sign of uneasiness, and six able-bodied men, collected in a pew below the pulpit, knew their duty in an emergency.

Saunderson's election to the Free Church of Kilbogie was therefore an event in the ecclesiastical world, and a consistent tradition in the parish explained its inwardness on certain grounds, complimentary both to the judgment of Kilbogie and the gifts of Mr. Saunderson. On Saturday evening he was removed from the train by the merest accident, and left the railway station in such a maze of meditation that he ignored the road to Kilbogie altogether, although its sign-post was staring him in the face, and continued his way to Drumtochty. It was half-past nine when Jamie Soutar met him on the high road through our glen, still travelling steadily west, and being arrested by his appearance, beguiled him into conversation, till he elicited that Saunderson was minded to reach Kilbogie. For an hour did the wanderer rest in Jamie's kitchen, during which he put Jamie's ecclesiastical history into a state of thorough repair—making seven distinct parallels between the errors that had afflicted the Scottish Church and the early heretical sects,—and then Jamie gave him in charge of a ploughman who was courting in Kilbogie, and was not averse to a journey that seemed to illustrate the double meaning of charity. Jeremiah was handed over to his anxious hosts at a quarter to one in the morning, covered with mud, somewhat fatigued, but in great peace of soul, having settled the place of election in the prophecy of Habakkuk as he came down with his silent companion through Tochty woods....