Rabbi and Priest A Story 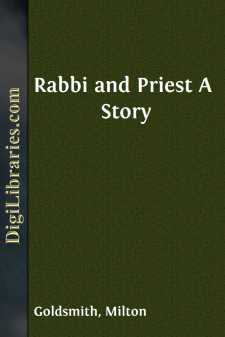 CHAPTER I. RECRUITS FOR SIBERIA.

We are in Russia.

On the high road from Tscherkask to Togarog, and not far from the latter village, there stood, in the year 1850, a large and inhospitable-looking inn. Its shingled walls, whose rough surface no paint-brush had touched for long generations, seemed decaying from sheer old age. Its tiled roof was in a most dilapidated state, displaying large gaps imperfectly stuffed with straw, and serving rather to collect the rain and snow for the more thorough inundation of the rooms below than to protect them from the elements. The grounds about the house were in keeping with it in point of picturesque neglect, and were as innocent of cultivation as the building was of paint. A roughly paved path led from the highway to the tavern door. Two old and sickly poplar trees cast a poor and half-hearted shade upon the parched ground, and mournfully shook their leaves over the scene of desolation. The herbage grew in isolated patches on a black and uncultivated soil. Nature might have originally been friendly to the place, but generations of poverty and neglect had reduced it to a condition of wretched misery.

As was this particular spot, so was the entire village. Slavery had wound its chains about the inhabitants, stifling whatever energy they possessed, entailing upon them constant toil to satisfy the exorbitant demands of their task-masters. Hence, even with a genial sun and a southern climate, the fields were barren, the crops poor and the people sunk in abject poverty.

The dilapidated inn, or kretschma, was known in the vicinity by the ideal and appropriate name of "Paradise"—appropriate, because in it many a sinner had been tempted and had fallen from grace. It was the popular rendezvous of the village peasants. Thither the serfs living in the village of Togarog and for miles around, would repair after their labors in the fields, and forget their fatigue in a dram of rank Russian vodka. Upon the barren plot of ground before the tavern, the mir, or communal assembly, was wont to meet, and in open session elect its Elder, decide its quarrels, allot its ground to the heads of families, and frame its rude and primitive laws.

In its bare and smoke-begrimed public room, the people of Togarog assembled night after night, and discussed, as far as the autocratic government of the Czar Nicholas would allow, the political news of the day. Poor souls! They enjoyed little latitude in this direction. Items of information concerning the acts of the central government in St. Petersburg were few and vague. The newspapers, owing to an extremely severe censorship, gave but meagre accounts of the political situation in the capital, and these were of necessity favorable to the government. Now and then, however, came rambling accounts of insurrections, of acts of cruelty, of large bodies of political offenders banished to a life-long slavery in Siberia. At times came the news that the Czar had been inspired by Providence to inaugurate some new and important reform, only to be followed by the announcement that Satan had held a conference with his Imperial Majesty, and that the reform had fallen through. All such information was carried into Togarog by word of mouth, for few of the good moujiks could read the papers. Woe to anyone, however, who allowed his tongue too great a license! Woe to him who dared utter a suggestion that the existing laws bore heavily upon him. It was a dangerous experiment to criticise in a hostile spirit any of the abuses heaped upon the degraded people. The condition of Russia was deplorable. Insurrection and rebellion nourished in all parts of the Empire. Degraded to the lowest depths, the crushed worm turned occasionally, but free itself it could not. Brave spirits arose for whom exile had no terrors. With their rude eloquence they incited their fellow-sufferers to throw off the yoke of tyranny and assert their freedom; and the morrow found them wandering toward the snow-bound confines of Siberia. Patriotism was not very much encouraged in Russia.

The proprietor of the tavern, a burly, red-faced Cossack, Peter Basilivitch by name, was in the employ and under the protection of the Governor of Alexandrovsk, in which department the village of Togarog lay. The rent paid by Basilivitch was nominal, it is true, but he sold enormous quantities of liquor, all of which he was obliged to buy from the Governor's stills; furthermore, he furnished his master with such information concerning the actions, words, and even thoughts of his patrons, as came under his observation; and as the serfs that frequented "Paradise" had no suspicion of the true relation betwixt master and man, the Governor was enabled to keep himself accurately informed as to the sayings and doings of his subjects....