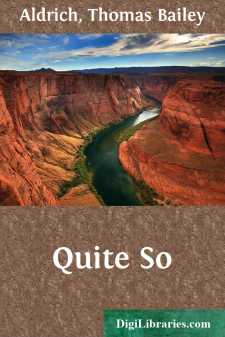 Of course that was not his name. Even in the State of Maine, where it is still a custom to maim a child for life by christening him Arioch or Shadrach or Ephraim, nobody would dream of calling a boy "Quite So." It was merely a nickname which we gave him in camp; but it stuck to him with such bur-like tenacity, and is so inseparable from my memory of him, that I do not think I could write definitely of John Bladburn if I were to call him anything but "Quite So."

It was one night shortly after the first battle of Bull Run. The Army of the Potomac, shattered, stunned, and forlorn, was back in its old quarters behind the earthworks. The melancholy line of ambulances bearing our wounded to Washington was not done creeping over Long Bridge; the blue smocks and the gray still lay in windrows on the field of Manassas; and the gloom that weighed down our hearts was like the fog that stretched along the bosom of the Potomac, and enfolded the valley of the Shenandoah. A drizzling rain had set in at twilight, and, growing bolder with the darkness, was beating a dismal tattoo on the tent—the tent of Mess 6, Company A, —th Regiment, N. Y. Volunteers. Our mess, consisting originally of eight men, was reduced to four. Little Billy, as one of the boys grimly remarked, had concluded to remain at Manassas; Corporal Steele we had to leave at Fairfax Court-House, shot through the hip; Hunter and Suydam we had said good-by to that afternoon. "Tell Johnny Reb," says Hunter, lifting up the leather side-piece of the ambulance, "that I 'll be back again as soon as I get a new leg." But Suydam said nothing; he only unclosed his eyes languidly and smiled farewell to us.

The four of us who were left alive and unhurt that shameful July day sat gloomily smoking our brier-wood pipes, thinking our thoughts, and listening to the rain pattering against the canvas. That, and the occasional whine of a hungry cur, foraging on the outskirts of the camp for a stray bone, alone broke the silence, save when a vicious drop of rain detached itself meditatively from the ridge-pole of the tent, and fell upon the wick of our tallow candle, making it "cuss," as Ned Strong described it. The candle was in the midst of one of its most profane fits when Blakely, knocking the ashes from his pipe and addressing no one in particular, but giving breath, unconsciously as it were, to the result of his cogitations, observed that "it was considerable of a fizzle."

"The 'on to Richmond' business?"

"I wonder what they 'll do about it over yonder," said Curtis, pointing over his right shoulder. By "over yonder" he meant the North in general and Massachusetts especially. Curtis was a Boston boy, and his sense of locality was so strong that, during all his wanderings in Virginia, I do not believe there was a moment, day or night, when he could not have made a bee-line for Faneuil Hall.

"Do about it?" cried Strong. "They 'll make about two hundred thousand blue flannel trousers and send them along, each pair with a man in it—all the short men in the long trousers, and all the tall men in the short ones," he added, ruefully contemplating his own leg-gear, which scarcely reached to his ankles.

"That's so," said Blakely. "Just now, when I was tackling the commissary for an extra candle, I saw a crowd of new fellows drawing blankets."

"I say there, drop that!" cried Strong. "All right, sir, didn't know it was you," he added hastily, seeing it was Lieutenant Haines who had thrown back the flap of the tent, and let in a gust of wind and rain that threatened the most serious bronchial consequences to our discontented tallow dip....