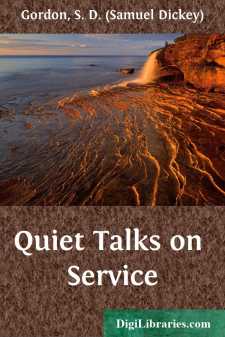 The Beginning of an Endless Friendship.

About a quarter of four one afternoon, three young men were standing together on a road leading down to a swift-running river. It was an old road, beaten down hard by thousands of feet through hundreds of years. It led down to the river, and then along its bank through a village scatteringly nestled by the fords of the river. The young men were intently absorbed in conversation.

One of them was a man to attract attention anywhere. He was clearly the leader of the three. His clothing was very plain, even to severeness. His face was spare, suggesting a diet as severely plain as his garments. The abundance of dark hair on head and face brought out sharply the spare, thoughtful, earnest look of his face. His eyes glowed like coals of living fire beneath the thick, bushy eyebrows. He talked quietly but intensely. There was a subdued vigor and force about his very person.

One of the others was a very different type of man. He was intense too, like the leader, but there was a fineness and a far-looking depth about his eye such as suggests a gray eye rather than a black. His hair was softer and finer, and his skin too. In him intensity seemed to blend with a fine grain in his whole make-up. The third man was a quiet, matter-of-fact looking fellow. He did not talk much, except to ask an occasional question. The three men were engaged in earnest conversation, when a fourth man, a stranger, came down the road and, passing the three by, went on ahead.

The leader of the three called the attention of his companions to the stranger. At once they leave his side and go after the stranger. As they nearly catch up to him, he unexpectedly turns and in a kindly voice asks, "Whom are you looking for?" Taken aback by the unexpected question, they do not answer, but ask where he is going. Quickly noticing the point of their question, he cordially says, "Come over and take tea with me."

They gladly accepted the invitation, and spent the evening with him. And the friendship begun that day continued to the end of their lives. Both became his dear friends. And one, the fine-grained, intense man, became his closest bosom friend. He never forgot that day. When he came years after to write about his hospitable friend, found that afternoon, he could remember every particular of their first meeting. We must always be grateful to John for his simple, full account of his first meeting with Jesus.

There is a little line in the story that may serve as a graphic biography of John the Herald....