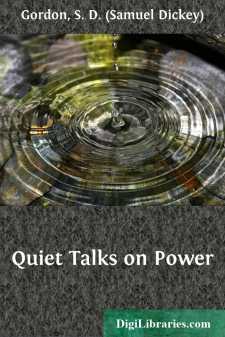 A few years ago I was making a brief tour among the colleges of Missouri. I remember one morning in a certain college village going over from the hotel to take breakfast with some of the boys, and coming back with one of the fellows whom I had just met. As we walked along, chatting away, I asked him quietly, "Are you a christian, sir?" He turned quickly and looked at me with an odd, surprised expression in his eye and then turning his face away said: "Well, I'm a member of church, but—I don't believe I'm very much of a christian." Then I looked at him and he frankly volunteered a little information. Not very much. He did not need to say much. You can see a large field through a chink in the fence. And I saw enough to let me know that he was right in the criticism he had made upon himself. We talked a bit and parted. But his remark set me to thinking.

A week later, in another town, speaking one morning to the students of a young ladies' seminary, I said afterwards to one of the teachers as we were talking: "I suppose your young women here are all christians." That same quizzical look came into her eye as she said: "I think they are all members of church, but I do not think they are all christians with real power in their lives." There was that same odd distinction.

A few weeks later, in Kansas City visiting the medical and dental schools, I recall distinctly standing one morning in a disordered room—shavings on the floor, desks disarranged—the institution just moving into new quarters, and not yet settled. I was discussing with a member of the faculty, the dean I think, about how many the room would hold, how soon it would be ready, and so on—just a business talk, nothing more—when he turned to me rather abruptly, looking me full in the face, and said with quiet deliberation: "I'm a member of church; I think I am a deacon in our church"—running his hand through his hair meditatively, as though to refresh his memory—"but I am not very much of a christian, sir." The smile that started to come to my face at the odd frankness of his remark was completely chased away by the distinct touch of pathos in both face and voice that seemed to speak of a hungry, unsatisfied heart within.

Perhaps it was a month or so later, in one of the mining towns down in the zinc belt of southwestern Missouri, I was to speak to a meeting of men. There were probably five or six hundred gathered in a Methodist Church. They were strangers to me. I was in doubt what best to say to them. One dislikes to fire ammunition at people that are absent. So stepping down to a front pew where several ministers were seated, I asked one of them to run his eye over the house and tell me what sort of a congregation it was, so far as he knew them. He did so, and presently replied: "I think fully two-thirds of these men are members of our churches"—and then, with that same quizzical, half-laughing look, he added, "but you know, sir, as well as I do, that not half of them are christians worth counting." "Well," I said to myself, astonished, "this is a mining camp; this certainly is not anything like the condition of affairs in the country generally."

But that series of incidents, coming one after the other in such rapid succession, set me thinking intently about that strange distinction between being members of a church on the one hand, and on the other, living lives that count and tell and weigh for Jesus seven days in the week. I knew that ministers had been recognizing such a distinction, but to find it so freely acknowledged by folks in the pew was new, and surely significant.

And so I thought I would just ask the friends here to-day very frankly, "What kind of Christians are you?" I do not say what kind you are, for I am a stranger, and do not know, and would only think the best things of you. But I ask you frankly, honestly now, as I ask myself anew, what kind are you? Do you know? Because it makes such a difference. The Master's plan—and what a genius of a plan it is—is this, that the world should be won, not by the preachers—though we must have these men of God for teaching and leadership—but by everyone who knows the story of Jesus telling someone, and telling not only with his lips earnestly and tactfully, but even more, telling with his life....