Quiet Talks on Following the Christ 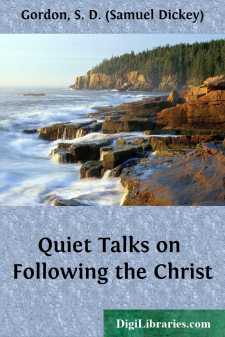 The Lone Man Who Went Before A Call to Friendship.

One day I watched two young men, a Japanese and an American, pacing the deck of a Japanese liner bound for San Francisco. Their heads were close together and bent down, and they were talking earnestly. The Japanese was saying, "Oh, yes, I believe all that as a theory, but is there power to make a man live it?"

He was an officer of the ship, one of the finest boats on the Pacific. The American was a young fellow who had gone out to Japan as a government teacher, and when his earnest sort of Christianity led to his dismissal he remained, and still remains, as a volunteer missionary. With his rare gift in personal touch he had won the young officer's confidence, and was explaining what Christianity stood for, when the Japanese politely interrupted him with his question about power. The tense eagerness of his manner and voice let one see the hunger of his heart. He had high ideals of life, but confessed that every time he was in port, the shore temptations proved too much, and he always came back on board with a feeling of bitter defeat. He had read about Christianity and believed it good in theory. But he knew nothing of its power.

Through his new American friend he came into personal touch with Christ, then and there. And up to the day we docked he put in his spare time bringing other Japanese to his friend's stateroom, and there more than one of them knelt, and came into warm touch of heart with the Lord Jesus.

Just so our Lord Jesus draws men, Oriental and Occidental alike. Just so He drew men when He was down here. He had great drawing power. Men came eagerly wherever they could find Him.

He drew all sorts of men. He drew the Jews, to whom He belonged racially. He drew the aggressive, domineering Romans, and the gentler cultured Greeks. He drew the half-breed Samaritans, who were despised by both Jew and foreigner, as not being either one thing or the other. The military men and the civilians, the cultured and the unlettered, the official class and those in private life, all alike felt the strong pull upon their hearts of His presence.

The pure of heart, like gentle Mary of Bethany, and the guileless Nathanael, were drawn to Him. And the very opposite, those openly bad in their life, couldn't resist His presence, and the call away from their low, bad level, but eagerly took His hand and came up. Fisherfolk and farmers, dwellers in the city and country, scholars and tradesmen, crude and refined, richly clad and ragged,—all sorts contentedly rubbed elbows and jostled each other in the crowds that came to listen, and stayed to listen longer, and then went away to come back again for more.

This was why He came—to draw men to Himself. Our Lord Jesus was the face of God looking longingly into men's faces. And they couldn't withstand the appeal of that gentle strong face. He was the voice of God talking into men's ears; and the music of that low, quiet voice thrilled and thralled their hearts. He was the hand of God, strong and warm, reaching down to take men by the hand and give them a strong lift up and back to the old Eden life....