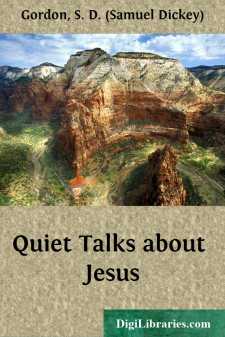 The Purpose in Jesus' Coming God Spelling Himself out in Jesus.

Jesus is God spelling Himself out in language that man can understand. God and man used to talk together freely. But one day man went away from God. And then he went farther away. He left home. He left his native land, Eden, where he lived with God. He emigrated from God. And through going away he lost his mother-tongue.

A language always changes away from its native land. Through going away from his native land man lost his native speech. Through not hearing God speak he forgot the sounds of the words. His ears grew dull and then deaf. Through lack of use he lost the power of speaking the old words. His tongue grew thick. It lost its cunning. And so gradually almost all the old meanings were lost.

God has always been eager to get to talking with man again. The silence is hard on Him. He is hungry to be on intimate terms again with his old friend. Of course he had to use a language that man could understand. Jesus is God spelling Himself out so man can understand. He is the A and the Z, and all between, of the Old Eden language of love.

Naturally enough man had a good bit of bother in spelling Jesus out. This Jesus was something quite new. When His life spoke the simple language of Eden again, the human heart with selfishness ingrained said, "That sounds good, but of course He has some selfish scheme behind it all. This purity and simplicity and gentleness can't be genuine." Nobody yet seems to have spelled Him out fully, though they're all trying: All on the spelling bench. That is, all that have heard. Great numbers haven't heard about Him yet. But many, ah! many could get enough, yes, can get enough to bring His purity into their lives and sweet peace into their hearts.

But there were in His days upon earth some sticklers for the old spelling forms. Not the oldest, mind you. Jesus alone stands for that. This Jesus didn't observe the idioms that had grown up outside of Eden. These people had decided that these old forms were the only ones acceptable. And so they disliked Him from the beginning, and quarrelled with Him. These idioms were dearer to them than life--that is, than His life. So having quarrelled, they did worse, and then--softly--worst. But even in their worst, Jesus was God spelling Himself out in the old simple language of Eden. His best came out in their worst.

Some of the great nouns of the Eden tongue--the God tongue--He spelled out big. He spelled out purity, the natural life of Eden; and obedience, the rhythmic harmony of Eden; and peace, the sweet music of Eden; and power, the mastery and dominion of Eden; and love, the throbbing heart of Eden. It was in biggest, brightest letters that love was spelled out. He used the biggest capitals ever known, and traced each in a deep dripping red, with a new spelling--s-a-c-r-i-f-i-c-e.

Jesus is God, following us up.

You see, the heart of God had been breaking--is breaking over the ways things have been going down on this planet. Folk fail to understand Him....