Quest of the Golden Girl, a Romance 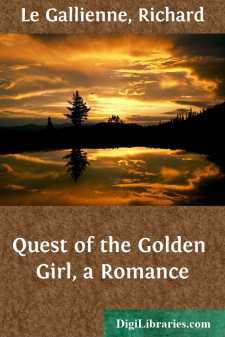 Add to My Favorites
Published: 8 years ago
Downloads: 116
Rating: (0 Votes)

CHAPTER I AN OLD HOUSE AND ITS BACHELOR

When the knell of my thirtieth birthday sounded, I suddenly realised, with a desolate feeling at the heart, that I was alone in the world. It was true I had many and good friends, and I was blessed with interests and occupations which I had often declared sufficient to satisfy any not too exacting human being. Moreover, a small but sufficient competency was mine, allowing me reasonable comforts, and the luxuries of a small but choice library, and a small but choice garden. These heavenly blessings had seemed mere than enough for nearly five years, during which the good sister and I had kept house together, leading a life of tranquil happy days. Friends and books and flowers! It was, we said, a good world, and I, simpleton,—pretty and dainty as Margaret was,—deemed it would go on forever. But, alas! one day came a Faust into our garden,—a good Faust, with no friend Mephistopheles,—and took Margaret from me. It is but a month since they were married, and the rice still lingers in the crevices of the pathway down to the quaint old iron-work gate. Yes! they have gone off to spend their honeymoon, and Margaret has written to me twice to say how happy they are together in the Hesperides. Dear happiness! Selfish, indeed, were he who would envy you one petal of that wonderful rose—Rosa Mundi—God has given you to gather.

But, all the same, the reader will admit that it must be lonely for me, and not another sister left to take pity on me, all somewhere happily settled down in the Fortunate Isles.

Poor lonely old house! do you, too, miss the light step of your mistress? No longer shall her little silken figure flit up and down your quiet staircases, no more deck out your silent rooms with flowers, humming the while some happy little song.

The little piano is dumb night after night, its candles unlighted, and there is no one to play Chopin to us now as the day dies, and the shadows stoop out of their corners to listen in vain. Old house, old house! We are alone, quite alone,—there is no mistake about that,—and the soul has gone out of both of us. And as for the garden, there is no company there; that is loneliest of all. The very sunlight looks desolation, falling through the thick-blossoming apple-trees as through the chinks and crevices of deserted Egyptian cities.

While as for the books—well, never talk to me again about the companionship of books! For just when one needs them most of all they seem suddenly to have grown dull and unsympathetic, not a word of comfort, not a charm anywhere in them to make us forget the slow-moving hours; whereas, when Margaret was here—but it is of no use to say any more! Everything was quite different when Margaret was here: that is enough. Margaret has gone away to the Fortunate Isles. Of course she'll come to see us now and again; but it won't be the same thing. Yes! old echoing silent House of Joy that is Gone, we are quite alone. Now, what is to be done?

CHAPTER II IN WHICH I DECIDE TO GO ON PILGRIMAGE

Though I have this bad habit of soliloquising, and indeed am absurd enough to attempt conversation with a house, yet the reader must realise from the beginning that I am still quite a young man....