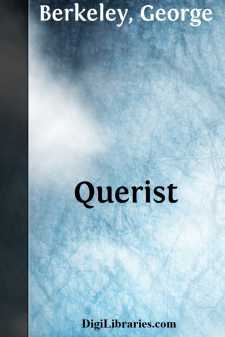 Whether there ever was, is, or will be, an industrious nation poor, or an idle rich?

2. Qu. Whether a people can be called poor, where the common sort are well fed, clothed, and lodged?

3. Qu. Whether the drift and aim of every wise State should not be, to encourage industry in its members? And whether those who employ neither heads nor hands for the common benefit deserve not to be expelled like drones out of a well-governed State?

4. Qu. Whether the four elements, and man's labour therein, be not the true source of wealth?

5. Qu. Whether money be not only so far useful, as it stirreth up industry, enabling men mutually to participate the fruits of each other's labour?

6. Qu. Whether any other means, equally conducing to excite and circulate the industry of mankind, may not be as useful as money.

7. Qu. Whether the real end and aim of men be not power? And whether he who could have everything else at his wish or will would value money?

8. Qu. Whether the public aim in every well-govern'd State be not that each member, according to his just pretensions and industry, should have power?

9. Qu. Whether power be not referred to action; and whether action doth not follow appetite or will?

10. Qu. Whether fashion doth not create appetites; and whether the prevailing will of a nation is not the fashion?

11. Qu. Whether the current of industry and commerce be not determined by this prevailing will?

12. Qu. Whether it be not owing to custom that the fashions are agreeable?

13. Qu. Whether it may not concern the wisdom of the legislature to interpose in the making of fashions; and not leave an affair of so great influence to the management of women and fops, tailors and vintners?

14. Qu. Whether reasonable fashions are a greater restraint on freedom than those which are unreasonable?

15. Qu. Whether a general good taste in a people would not greatly conduce to their thriving? And whether an uneducated gentry be not the greatest of national evils?

16. Qu. Whether customs and fashions do not supply the place of reason in the vulgar of all ranks? Whether, therefore, it doth not very much import that they should be wisely framed?

17. Qu. Whether the imitating those neighbours in our fashions, to whom we bear no likeness in our circumstances, be not one cause of distress to this nation?

18. Qu. Whether frugal fashions in the upper rank, and comfortable living in the lower, be not the means to multiply inhabitants?

19. Qu. Whether the bulk of our Irish natives are not kept from thriving, by that cynical content in dirt and beggary which they possess to a degree beyond any other people in Christendom?

20. Qu. Whether the creating of wants be not the likeliest way to produce industry in a people? And whether, if our peasants were accustomed to eat beef and wear shoes, they would not be more industrious?

21. Qu. Whether other things being given, as climate, soil, etc., the wealth be not proportioned to the industry, and this to the circulation of credit, be the credit circulated or transferred by what marks or tokens soever...?