Queer Stories for Boys and Girls 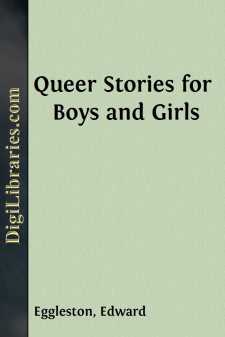 You think that folks in fine clothes are the only folks that ever see fairies, and that poor folks can't afford them. But in the days of the real old-fashioned "Green Jacket and White Owl's Feather" fairies, it was the poor boy carrying fagots to the cabin of his widowed mother who saw wonders of all sorts wrought by the little people; and it was the poor girl who had a fairy godmother. It must be confessed that the mystery-working, dewdrop-dancing, wand-waving, pumpkin-metamorphosing little rascals have been spoiled of late years by being admitted into fine houses. Having their pictures painted by artists, their praises sung by poets, their adventures told in gilt-edge books, and, above all, getting into the delicious leaves of St. Nicholas, has made them "stuck up," so that it is not the poor girl in the cinders, nor the boy with a bundle of fagots now, but girls who wear button boots and tie-back skirts, and boys with fancy waists and striped stockings that are befriended by fairies, whom they do not need.

But away off from the cities there still lives a race of unflattered fairies who are not snobbish, and who love little girls and boys in pinafores and ragged jackets. These spirits are not very handsome, and so the artists do not draw their pictures, and they do not get into gilt-edge Christmas books. Dear, ugly, good fairies! I hope they will not be spoiled by my telling you something about them.

Little Bobby Towpate saw some of them; and it's about Bobby, and the fairies he saw, that I want to speak. Bobby was the thirteenth child in a rather large family—there were three younger than he. He lived in a log cabin on the banks of a stream, the right name of which is "Indian Kentucky Creek." I suppose it was named "Indian Kentucky" because it is not in Kentucky, but in Indiana; and as for Indians, they have been gone many a day. The people always call it "The Injun Kaintuck." They tuck up the name to make it shorter.

Bobby was only four years and three-quarters old, but he had been in pantaloons for three years and a half, for the people in the Indian Kaintuck put their little boys into breeches as soon as they can walk—perhaps a little before. And such breeches! The little white-headed fellows look like dwarf grandfathers, thirteen hundred years of age. They go toddling about like old men who have grown little again, and forgotten everything they ever knew.

But Bobby Towpate was not ugly. Under his white hair, which "looked every way for Sunday," were blue eyes and ruddy cheeks, and a mouth as pretty as it was solemn. The comical little fellow wore an unbleached cotton shirt, and tattered pantaloons, with home-made suspenders or "gallowses." The pantaloons had always been old, I think, for they were made out of a pair of his father's—his "daddy's," as he would have told you—and nobody ever knew his father to have a new pair, so they must have been old from the beginning. For in the Indian Kaintuck country nothing ever seems to be new....