Queen Victoria, her girlhood and womanhood 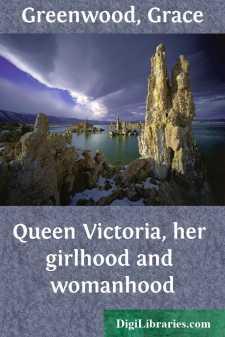 It seems to me that the life of Queen Victoria cannot well be told without a prefacing sketch of her cousin, the Princess Charlotte, who, had she lived, would have been her Queen, and who was in many respects her prototype. It is certain, I think, that Charlotte Augusta of Wales, that lovely miracle-flower of a loveless marriage, blooming into a noble and gracious womanhood, amid the petty strifes and disgraceful intrigues of a corrupt Court, by her virtues and graces, by her high spirit and frank and fearless character, prepared the way in the loyal hearts of the British people, for the fair young kinswoman, who, twenty-one years after her own sad death, reigned in her stead.

Through all the bright life of the Princess Charlotte—from her beautiful childhood to her no less beautiful maturity—the English people had regarded her proudly and lovingly as their sovereign, who was to be; they had patience with the melancholy madness of the poor old King, her grandfather, and with the scandalous irregularities of the Prince Regent, her father, in looking forward to happier and better things under a good woman's reign; and after all those fair hopes had been coffined with her, and buried in darkness and silence, their hearts naturally turned to the royal little girl, who might possibly fill the place left so drearily vacant. England had always been happy and prosperous under Queens, and a Queen, please God, they would yet have.

The Princess Charlotte was the only child of the marriage of the Prince Regent, afterwards George IV., with the Princess Caroline of Brunswick, Her childhood was overshadowed by the hopeless estrangement of her parents. She seems to have especially loved her mother, and by the courage and independence she displayed in her championship of that good- hearted but most eccentric and imprudent woman, endeared herself to the English people, who equally admired her pluck and her filial piety—on the maternal side. They took a fond delight in relating stories of rebellion against her august papa, and even against her awful grandmamma, Queen Charlotte. They told how once, when a mere slip of a girl, being forbidden to pay her usual visit to her poor mother, she insisted on going, and on the Queen undertaking to detain her by force, resisted, struggling right valiantly, and after damaging and setting comically awry the royal mob-cap, broke away, ran out of the palace, sprang into a hackney-coach, and promising the driver a guinea, was soon at her mother's house and in her mother's arms. There is another—a Court version of this hackney-coach story—which states that it was not the Queen, but the Prince Regent that the Princess ran away from—so that there could have been no assault on a mob-cap. But the common people of that day preferred the version I have given, as more piquant, especially as old Queen Charlotte was known to be the most solemnly grand of grandmammas, and a personage of such prodigious dignity that it was popularly supposed that only Kings and Queens, with their crowns actually on their heads, were permitted to sit in her presence....