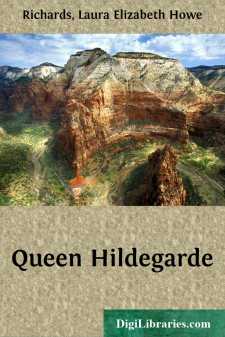 "And have you decided what is to become of Hilda?" asked Mrs. Graham.

"Hilda?" replied her husband, in a tone of surprise, "Hilda? why, she will go with us, of course. What else should become of the child? She will enjoy the trip immensely, I have no doubt."

Mrs. Graham sighed and shook her head. "I fear that is impossible, dear George!" she said. "To tell the truth, I am a little anxious about Hilda; she is not at all well. I don't mean that she is actually ill," she added quickly, as Mr. Graham looked up in alarm, "but she seems languid and dispirited, has no appetite, and is inclined to be fretful,—an unusual thing for her."

"Needs a change!" said Mr. Graham, shortly. "Best thing for her. Been studying too hard, I suppose, and eating caramels. If I could discover the man who invented that pernicious sweetmeat, I would have him hanged!—hanged, madam!"

"Oh, no, you wouldn't, dear!" said his wife, laughing softly; "I think his life would be quite safe. But about Hilda now! She does need a change, certainly; but is the overland journey in July just the right kind of change for her, do you think?"

Mr. Graham frowned, ran his fingers through his hair, drummed on the table, and then considered his boots attentively. "Well—no!" he said at last, reluctantly. "I—suppose—not. But what can we do with her? Send her to Fred and Mary at the seashore?"

"To sleep in a room seven by twelve, and be devoured by mosquitoes, and have to wear 'good clothes' all the time?" returned Mrs. Graham. "Certainly not."

"Yes," replied his wife, "with sixteen trunks, a maid, a footman, and three lapdogs! That would never do for Hilda."

"You surely are not thinking of leaving her alone here with the servants?"

The lady shook her head. "No, dear; such poor wits as Heaven granted me are not yet entirely gone, thank you!"

Mr. Graham rose from his chair and flung out both arms in a manner peculiar to him when excited. "Now, now, now, Mildred!" he said impressively, "I have always said that you were a good woman, and I shall continue to assert the same; but you have powers of tormenting that could not be surpassed by the most heartless of your sex. It is perfectly clear, even to my darkened mind, that you have some plan for Hilda fully matured and arranged in that scheming little head of yours; so what is your object in keeping me longer in suspense? Out with it, now! What are you—for of course I am in reality only a cipher (a tolerably large cipher) in the sum—what are you, the commander-in-chief, going to do with Hilda, the lieutenant-general? If you will kindly inform the orderly-sergeant, he will act accordingly, and endeavor to do his duty."

Pretty Mrs. Graham laughed again, and looked up at the six-feet-two of sturdy manhood standing on the hearth-rug, gazing at her with eyes which twinkled merrily under the fiercely frowning brows. "You are a very disorderly-sergeant, dear!" she said....