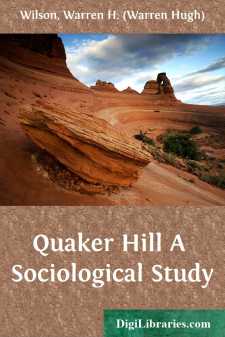 Fourteen years ago the author came to Quaker Hill as a resident, and has spent at least a part of each of the intervening years in interested study of the locality. For ten of those years the fascination of the social life peculiar to the place was upon him. Yet all the time, and increasingly of late, the disillusionment which affects every resident in communities of this sort was awakening questions and causing regrets. Why does not the place grow? Why do the residents leave? What is the illusive unity which holds all the residents of the place in affection, even in a sort of passion for the locality, yet robs them of full satisfaction in it, and drives the young and ambitious forth to live elsewhere?

The answer to these questions is not easily to be had. It is evident that on Quaker Hill life is closely organized, and that for eighteen decades a continuous vital principle has given character to the population. The author has attempted, by use of the analysis of the material, according to the "Inductive Sociology" of Professor Franklin H. Giddings, to study patiently in detail each factor which has played its part in the life of this community.

This book presents the result of that study, and the author acknowledges his indebtedness to Professor Giddings for the working analysis necessary to the knowledge of his problem, as well as for patient assistance and inspiring interest. The gradual unfolding of the conclusions, the logical unity of the whole, and the explanation of that which before was not clear, have all been the fruit of this patient field-work.

The study of human society is at the present time little more than a classifying of material. Only with great reserve should any student announce ultimate results, or generalize upon the whole problem. For this period of classifying and analyzing the material, such study of limited populations as this should have value. The author makes no apology for the smallness of his field of study. Quaker Hill is not even a civil division. It is a fraction of a New York town. Therefore no statistical material of value is available. It is, moreover, not now an economic unit, though it still may be considered a sociological one. This study, therefore, must be of interest as an analysis of the working of purely social forces in a small population, in which the whole process may be observed, more closely than in the intricate and subtle evolution of a larger, more self-sufficient social aggregate.

The descriptive history of Quaker Hill, which it is my purpose in this book to write, comprises three periods; and the descriptive sociology records two differing yet related forms of social life, connected by a period of transition. This study will then be made up of three parts: First, the Quaker Community; second, the Transition; and third, the Mixed Community. The periods of time corresponding to these three are: The Period of the Quaker Community, 1730 to 1830; second, the Period of Transition, 1830 to 1880; and third, the Period of the Mixed Community, 1880 to 1905....