Quadrupeds, What They Are and Where Found A Book of Zoology for Boys 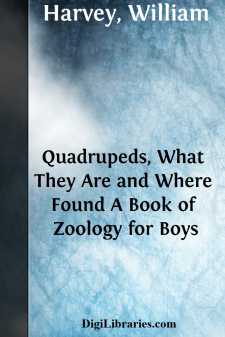 I have been called upon to write illustrative sketches to a series of engravings, designed by an eminent artist. In performing my part of the work I have thrown the Mammalia into twenty-four groups—corresponding more or less to the picture designs—and have dwelt chiefly on the geographical distribution of the animals. The Cetaceae and Vespertilionidae are properly omitted.

In the groups given there is no attempt made at any very scientific arrangement. The sketches are purely of a popular character, even the scientific nomenclature being avoided. It is hoped, however, that they may prove of service to the zoological tyro, and form as it were his first stepping-stone to a higher order of classification.

In reality, notwithstanding the prodigious speculations of learned anatomists, no truly good arrangement of the Mammalia has yet been arrived at; the deficiency arising from the fact that, as yet, no true zoologist has had the opportunity of a sufficiently extended observation of the natural habits of animals.

Now, however, that the great agent—steam—has as it were “brought the ends of the earth together,” the opportunity is no longer wanting; and it is to be hoped that a better classification may soon be obtained. Who knows but that some ardent young zoologist, who has taken his first lessons from this little book, may be the man to supply the desideratum? Who knows?

Such a result would be a proud triumph for the author of these monographic sketches.

Chapter One. Monkeys of the Old World.

The great family of the Monkeys, or the “Monkey tribe,” as it is usually called, is divided by naturalists into two large groups—the “Monkeys of the Old World,” or those that inhabit Africa, Asia, and the Asiatic islands; and the “Monkeys of the New World,” or those that belong to America. This classification is neither scientific nor natural, but as it serves to simplify the study of these quadrupeds—or quadrumana, as they are termed—it is here retained. Moreover, as there is no genus of monkey, nor even a species, common to both hemispheres, such a division can do no harm.

The number of species of these animals, both in the Old and New Worlds, is so great, that to give a particular description of each would fill a large volume. It will be only possible in this sketch to point out the countries they inhabit, and to say a word or two of the more remarkable kinds.

In point of precedence, the great Ourang-outang contests the palm with the Chimpanzee. Both these creatures often attain the size of an ordinary man, and individuals of both have been captured exceeding this size; while, at the same time, in muscular strength, one of them is supposed to equal seven or eight men. It is remarkable how little is known of the habits of either. This is accounted for by the fact that they both inhabit regions still unexplored by civilised man, dwelling in thick impenetrable forests, where even the savage himself rarely penetrates....