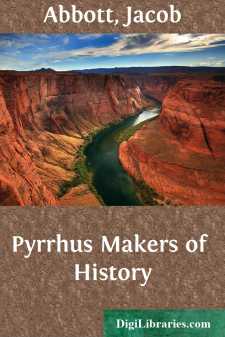 Pyrrhus, King of Epirus, entered at the very beginning of his life upon the extraordinary series of romantic adventures which so strikingly marked his career. He became an exile and a fugitive from his father's house when he was only two years old, having been suddenly borne away at that period by the attendants of the household, to avoid a most imminent personal danger that threatened him. The circumstances which gave occasion for this extraordinary ereption were as follows:

The country of Epirus, as will be seen by the accompanying map, was situated on the eastern shore of the Adriatic Sea, and on the southwestern confines of Macedonia. The kingdom of Epirus was thus very near to, and in some respects dependent upon, the kingdom of Macedon. In fact, the public affairs of the two countries, through the personal relations and connections which subsisted from time to time between the royal families that reigned over them respectively, were often intimately intermingled, so that there could scarcely be any important war, or even any great civil dissension in Macedon, which did not sooner or later draw the king or the people of Epirus to take part in the dispute, either on one side or on the other. And as it sometimes happened that in these questions of Macedonian politics the king and the people of Epirus took opposite sides, the affairs of the great kingdom were often the means of bringing into the smaller one an infinite degree of trouble and confusion.

The period of Pyrrhus's career was immediately subsequent to that of Alexander the Great, the birth of Pyrrhus having taken place about four years after the death of Alexander. At this time it happened that the relations which subsisted between the royal families of the two kingdoms were very intimate. This intimacy arose from an extremely important intermarriage which had taken place between the two families in the preceding generation—namely, the marriage of Philip of Macedon with Olympias, the daughter of a king of Epirus. Philip and Olympias were the father and mother of Alexander the Great. Of course, during the whole period of the great conqueror's history, the people of Epirus, as well as those of Macedon, felt a special interest in his career. They considered him as a descendant of their own royal line, as well as of that of Macedon, and so, very naturally, appropriated to themselves some portion of the glory which he acquired. Olympias, too, who sometimes, after her marriage with Philip, resided at Epirus, and sometimes at Macedon, maintained an intimate and close connection, both with her own and with Philip's family; and thus, through various results of her agency, as well as through the fame of Alexander's exploits, the governments of the two countries were continually commingled.

Olympias as a wife.

It must not, however, by any means be supposed that the relations which were established through the influence of Olympias, between the courts of Epirus and of Macedon, were always of a friendly character. They were, in fact, often the very reverse. Olympias was a woman of a very passionate and ungovernable temper, and of a very determined will; and as Philip was himself as impetuous and as resolute as she, the domestic life of this distinguished pair was a constant succession of storms. At the commencement of her married life, Olympias was, of course, generally successful in accomplishing her purposes....