by Louis A. Flemming 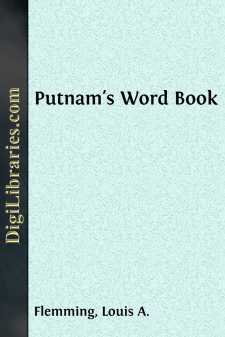 Add to My Favorites
Published: 8 years ago
Downloads: 458
Rating: (0 Votes)

The purpose of this book, as conceived by the author, is not to attempt to create or to influence usage by pointing out which words should or should not be used, nor to explain the meaning of terms, but simply to provide in a form convenient for reference and study the words that can be used, leaving it to those who consult its pages to determine for themselves, with the aid of a dictionary if necessary, which words supply the information they are looking for or express most accurately the thoughts in their minds. The questions, therefore, that were constantly in the author's mind while he was preparing the manuscript were not, is this word used? nor should it be used? but is it a word that some one may want to know as a matter of information or to use in giving expression to some thought? When the word in question seemed to be one that would be of service it was given a place in the collection to which it belongs. Believing the book would be consulted by students and workers in special fields, the author incorporated into it many words, including some technical terms, that might, in the case of a work of more restricted usefulness, have been omitted.

It happens frequently that the word which one thinks of first does not express the exact shade of thought one desires to express and some other word of similar meaning is necessary. For this reason there is, for those who want to write and speak with precision and effectiveness, an important use for collections of synonyms. Throughout this book synonyms means words that are similar in meaning or which express the same general idea with shades of difference. Those who use this work should bear in mind that all words that are classified as synonyms cannot be used interchangeably; that there are differences in meaning between them; and that, before using an unfamiliar word, they should ascertain its meaning and usage in a dictionary. Antonyms are words that are opposed to another word in meaning. Such words are helpful when it is desired to express contrasted or conflicting ideas or thoughts. In many instances, however, a list of antonyms is unnecessary. For example, no antonyms of good are found after the synonyms of that word because one thinks of bad instantly when considering the opposite of good; and under bad numerous synonyms, which are also the antonyms of good, are found.

It is not an infrequent occurrence for a word to be required that is neither a synonym nor an antonym of a familiar term but merely associated with it in meaning and usage. Such a word cannot when unknown or momentarily forgotten be easily found in a dictionary. In this volume collections of such words are found after the general terms with which they are associated. This feature of the book will be of service as a memory-help when a word cannot be recalled and also, which is perhaps of greater importance, by enabling writers and students to learn of words objectively or through their associations.

By turning to the word that is thought of first or to the word with which the term that is wanted is associated and reading the collections there presented, any word that may be desired will be found....