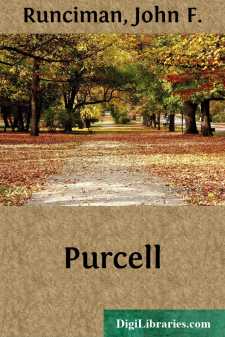 We once had a glorious school of composers. It departed, with no sunset splendour on it, nor even the comfortable ripe tints of autumn. The sun of the young morning shone on its close; the dews of dawn gleam for ever on the last music; the freshness and purity of the air of early morning linger about it. It closed with Purcell, and it is no hyperbole to say the note that distinguishes Purcell's music from all other music in the world is the note of spring freshness. The dewy sweetness of the morning air is in it, and the fragrance of spring flowers. The brown sheets on which the notes are printed have lain amongst the dust for a couple of centuries; they are musty and mildewed. Set the sheets on a piano and play: the music starts to life in full youthful vigour, as music from the soul of a young god should. It cannot and never will grow old; the everlasting life is in it that makes the green buds shoot. To realise the immortal youth of Purcell's music, let us make a comparison. Consider Mozart, divine Mozart. Mixed with the ineffable beauty of his music there is sadness, apart and different from the sadness that was of the man's own soul. It is the sadness that clings to forlorn things of an order that is dead and past: it tinkles in the harpsichord figurations and cadences; it makes one think of lavender scent and of the days when our great-grandmothers danced minuets. Purcell's music, too, is sad at times, but the human note reaches us blended with the gaiety of robust health and the clean young life that is renewed each year with the lengthening days.

The beauty of sanity, strength, and joyousness—this pervades all he wrote. It was modern when he wrote; it is modern to-day; it will be modern to-morrow and a hundred years hence. In it the old modes of his mighty predecessors Byrde and Tallis are left an eternity behind; they belong to a forgotten order. Of the crabbedness of Harry Lawes there is scarcely a trace: that belonged to an era of experiments. The strongest and most original of his immediate predecessors, Pelham Humphries, influenced him chiefly by showing him the possibility of throwing off the shackles of the dead and done with. The contrapuntal formulas and prosaic melodic contours, to be used so magnificently by Handel, were never allowed to harden and fossilise in Purcell's music. Even where a phrase threatens us with the dry and commonplace, he gives it a miraculous twist, or adds a touch of harmony that transforms it from a dead into a living thing, from something prosaic into something poetic, rare and enchanting. Let me instance at once how he could do this in the smallest things. This is ordinary enough; it might be a bit of eighteenth-century counterpoint:

But play it with the second part:

The magic of the simple thirds, marked with asterisks, is pure Purcell. And it is pure magic: there is no explaining the effect. He got into his music the inner essence that makes the external beauty of the picturesque England he knew....