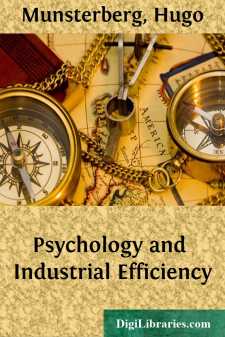 Our aim is to sketch the outlines of a new science which is to intermediate between the modern laboratory psychology and the problems of economics: the psychological experiment is systematically to be placed at the service of commerce and industry. So far we have only scattered beginnings of the new doctrine, only tentative efforts and disconnected attempts which have started, sometimes in economic, and sometimes in psychological, quarters. The time when an exact psychology of business life will be presented as a closed and perfected system lies very far distant. But the earlier the attention of wider circles is directed to its beginnings and to the importance and bearings of its tasks, the quicker and the more sound will be the development of this young science. What is most needed to-day at the beginning of the new movement are clear, concrete illustrations which demonstrate the possibilities of the new method. In the following pages, accordingly, it will be my aim to analyze the results of experiments which have actually been carried out, experiments belonging to many different spheres of economic life. But these detached experiments ought always at least to point to a connected whole; the single experiments will, therefore, always need a general discussion of the principles as a background. In the interest of such a wider perspective we may at first enter into some preparatory questions of theory. They may serve as an introduction which is to lead us to the actual economic life and the present achievements of experimental psychology.

It is well known that the modern psychologists only slowly and very reluctantly approached the apparently natural task of rendering useful service to practical life. As long as the study of the mind was entirely dependent upon philosophical or theological speculation, no help could be expected from such endeavors to assist in the daily walks of life. But half a century has passed since the study of consciousness was switched into the tracks of exact scientific investigation. Five decades ago the psychologists began to devote themselves to the most minute description of the mental experiences and to explain the mental life in a way which was modeled after the pattern of exact natural sciences. Their aim was no longer to speculate about the soul, but to find the psychical elements and the constant laws which control their connections. Psychology became experimental and physiological. For more than thirty years the psychologists have also had their workshops. Laboratories for experimental psychology have grown up in all civilized countries, and the new method has been applied to one group of mental traits after another. And yet we stand before the surprising fact that all the manifold results of the new science have remained book knowledge, detached from any practical interests. Only in the last ten years do we find systematic efforts to apply the experimental results of psychology to the needs of society....