Psmith in the City 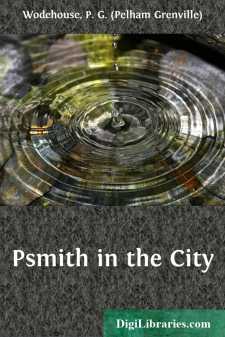 Considering what a prominent figure Mr John Bickersdyke was to be in Mike Jackson's life, it was only appropriate that he should make a dramatic entry into it. This he did by walking behind the bowler's arm when Mike had scored ninety-eight, causing him thereby to be clean bowled by a long-hop.

It was the last day of the Ilsworth cricket week, and the house team were struggling hard on a damaged wicket. During the first two matches of the week all had been well. Warm sunshine, true wickets, tea in the shade of the trees. But on the Thursday night, as the team champed their dinner contentedly after defeating the Incogniti by two wickets, a pattering of rain made itself heard upon the windows. By bedtime it had settled to a steady downpour. On Friday morning, when the team of the local regiment arrived in their brake, the sun was shining once more in a watery, melancholy way, but play was not possible before lunch. After lunch the bowlers were in their element. The regiment, winning the toss, put together a hundred and thirty, due principally to a last wicket stand between two enormous corporals, who swiped at everything and had luck enough for two whole teams. The house team followed with seventy-eight, of which Psmith, by his usual golf methods, claimed thirty. Mike, who had gone in first as the star bat of the side, had been run out with great promptitude off the first ball of the innings, which his partner had hit in the immediate neighbourhood of point. At close of play the regiment had made five without loss. This, on the Saturday morning, helped by another shower of rain which made the wicket easier for the moment, they had increased to a hundred and forty-eight, leaving the house just two hundred to make on a pitch which looked as if it were made of linseed.

It was during this week that Mike had first made the acquaintance of Psmith's family. Mr Smith had moved from Shropshire, and taken Ilsworth Hall in a neighbouring county. This he had done, as far as could be ascertained, simply because he had a poor opinion of Shropshire cricket. And just at the moment cricket happened to be the pivot of his life.

'My father,' Psmith had confided to Mike, meeting him at the station in the family motor on the Monday, 'is a man of vast but volatile brain. He has not that calm, dispassionate outlook on life which marks your true philosopher, such as myself. I—'

'I say,' interrupted Mike, eyeing Psmith's movements with apprehension, 'you aren't going to drive, are you?'

'Who else? As I was saying, I am like some contented spectator of a Pageant. My pater wants to jump in and stage-manage. He is a man of hobbies. He never has more than one at a time, and he never has that long. But while he has it, it's all there. When I left the house this morning he was all for cricket. But by the time we get to the ground he may have chucked cricket and taken up the Territorial Army. Don't be surprised if you find the wicket being dug up into trenches, when we arrive, and the pro....