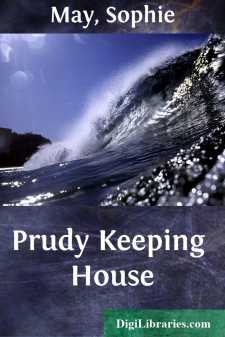 One of Mrs. Allen's bay windows stood open. Between the ivies, tuberoses, and lilies, you caught a glimpse of gilded walls and rare paintings. Better than all, you saw four young faces looking out at a snow-storm; Dotty with eyes like living diamonds, Prudy fair and sweet, Horace lordly and wise; and the little one "with dove's eyes" following every motion of his head, as if she were a sunflower, and he the sun.

"Things don't freeze in cloudy weather, Prue; but you children will catch cold; so here goes."

"O, Hollis, don't those snow-specks look like little bits o' birdies, athout any wings or any feathers, too?"

"Droll birds they would be," said Aunt Madge. "That reminds me of an old riddle, children,—

"Why, auntie, the 'bird featherless' must have been the snow; but who was the knight!"

"Who rides over the sky without any horse, Dotty, and melts snow by shining on it?"

"Hollis, I want to ask you sumpin. Does those snow-specks fly down out o' heaven? Does the little angels see 'em?"

"No, Topknot; they only come from the clouds; they are nowhere near up to the little angels."

"Not half so near as you are, Goldilocks," said Aunt Madge, brushing back the child's soft hair.

"I hope you don't mean Fly's going to die," cried Dotty, in sudden alarm, remembering how crossly she had spoken to the child two or three times since they had been in New York.

"No, Dotty; I only mean that we are told, in the Bible, there are 'ministering spirits,' and we believe they watch over good little children."

"O, my shole!" said Fly, folding her tiny hands, and raising her eyes to the top of the window. "Nice, pretty little spirricks out there, only but I can't see 'em."

"No, Miss Eyebright; not even you. Wait till you go where they live."

"Wisht I could go up there now, a-visiting; stay all night, and three weeks and then—"

"Hush, Fly Clifford; you're the wickedest girl to talk," said Dotty. "I shouldn't ever expect to go to heaven at all, if I said such things as you do.—O, auntie, I am so sorry it storms! Maria and her mother won't come—will they?"

Maria Brooks was a little blind girl with whom the family were just making acquaintance. A few days before, when she was walking Broadway, led by her "freckled doggie," Fly, lost on the street, had spied her, and been attracted by the dog, and Maria had persuaded the child to go home with her. Afterwards Mrs. Brooks had taken Fly back to Colonel Allen's; and in this way Aunt Madge had learned about Maria's blindness, and had offered to take her to a physician who could help her, if any one could.

"Yes, Dotty; I presume they will come to-day, for Maria can hardly wait to have the doctor look at her eyes."

"Of course they'll come," said Horace; "who ever heard of brooks minding the weather?...