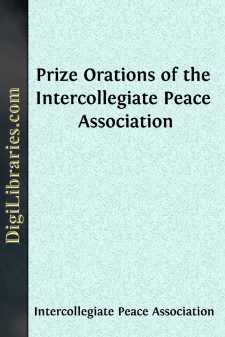 These orations are selected from hundreds of similar addresses spoken in recent years by hundreds of students in American colleges. I believe it is not too bold to say that they represent the highest level of undergraduate thinking and speaking. They are worthy interpreters of the cause of peace, but they are, as well, noble illustrations of the type of intellectual and moral culture of American students. Whoever reads them will, I believe, become more optimistic, not only over the early fulfillment of the dreams of peace among nations, but also over the intellectual and ethical condition of academic life.

For the simple truth is that the cause of peace makes an appeal of peculiar force to the undergraduate. It appeals to his imagination. This imagination is at once historic and prophetic. War makes an appeal to the historic imagination of the student. His study of Greek and Roman history has been devoted too largely to the wars that these peoples waged. Marathon, Salamis, Carthage, are names altogether too familiar and significant. By contrast he sees what this history, which is written in blood, might have become. If the millions of men slain had been permitted to live, and if the uncounted treasure spent had been economically used, the results in the history of civilization would have been far richer and nobler. He notes, too, does this student, that if the last decades of the eighteenth century and the first decades of the nineteenth had been free from wars in Europe, humanity would now have attained a far higher level of physical and intellectual strength. The historic imagination of the student pictures, as his reason interprets, such conditions. His prophetic imagination likewise exercises its creative function. The student sees nations to-day dwelling in armed truces and moving to and fro as a soldiery actual or possible. He realizes that war puts up what civilization puts down, and puts down what civilization elevates. He reads the lamented Robertson's great lecture on the poetry of war, but he knows also, as Robertson intimates, that "peace is blessed; peace arises out of charity." The poetry of peace is more entrancing than the poetry of carnage. To this primary element in the mind of the undergraduate—the imagination—our great cause therefore makes an appeal of peculiar earnestness.

To the reason of the college man, also, the cause of peace makes a peculiar appeal through its simple logic. War is most illogical. It breaks the law of the proper interpretation of causality. When two nations of adjacent territory cannot agree over a boundary line, why should settlement be made in terms of physical force? When two nations fail to see eye to eye in adjusting the questions of certain fishing rights, why should they incarnadine the seas in seeking for the truth to be applied in settlement? In civil disputes, why, asks the student, should rifles be employed to discover truth and right? War is an intellectual anachronism, a breach of logic. Of course, one may reply, humanity is not logical in its reasoning any more than it is exact in its observing. Of course it is not; but the college is set to cast out the rule of no-reason and to bring in the reign of reason. Peace furnishes a motive and a method of such advancement. Peace is logic for the individual and for the nation.

It is plain enough, too, that the economic side of war makes a tremendous appeal to the student. The cost of the battleship Indiana was practically $6,000,000; the total value of grounds and buildings of the colleges and universities in Indiana is slightly more than $7,000,000, and the productive funds are $4,000,000....