Privateering and Piracy in the Colonial Period Illustrative Documents 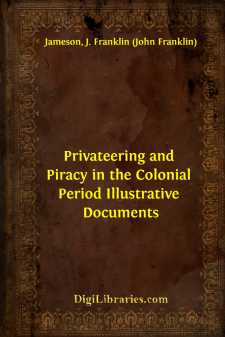 The National Society of the Colonial Dames of America have formed the laudable habit of illustrating the colonial period of United States history, in which they are especially interested, by published volumes of original historical material, previously unprinted, and relating to that period. Thus in the course of years they have made a large addition to the number of documentary sources available to the student of that period. First they published, in 1906, in two handsome volumes, the Correspondence of William Pitt, when Secretary of State, with Colonial Governors and Military and Naval Commanders in America, edited by the late Miss Gertrude Selwyn Kimball, containing material of great importance to the history of the colonies as a whole, and of the management of the French and Indian War. Next, in 1911 and 1914, they published the two volumes of Professor James C. Ballagh's valuable edition of the Letters of Richard Henry Lee. Then, in 1912, they brought out, again in two volumes, the Correspondence of Governor William Shirley, edited by Dr. Charles H. Lincoln, and illustrating the history of several colonies, particularly those of New England, during the period of what in our colonial history is called King George's War. More recently, in 1916, the Society published an entertaining volume of hitherto unprinted Travels in the American Colonies, edited by Dr. Newton D. Mereness.

It was resolved that the next volume after these should be devoted to documents relating to maritime history. In proportion to its importance, that aspect of our colonial history has in general received too little attention. In time of peace the colonists, nearly all of whom dwelt within a hundred miles of ocean or tidewater, maintained constantly a maritime commerce that had a large importance to their economic life and gave employment to no small part of their population. In time of war, their naval problems and dangers and achievements were hardly less important than those of land warfare, but have been far less exploited, whether in narrative histories or in volumes of documentary materials. Accordingly the Society's Committee on Publication readily acceded to the suggestion that a volume should be made up of documents illustrating the history of privateering and piracy as these stand related to the life of America during the colonial period—for it is agreed that few aspects of our maritime history in that period have greater importance and interest than these two. In some of our colonial wars, as later in those of the Revolution and of 1812, American privateering assumed such proportions as to make it, for brief periods, one of the leading American industries. We cannot quite say the same concerning American piracy, and indeed it might be thought disrespectful to our ancestors—or predecessors, for pirates mostly died young and left few descendants—but at least it will be conceded that piracy at times flourished in American waters, that not a few of the pirates and of those on shore who received their goods and otherwise aided them were Americans, that their activities had an important influence on the development of American commerce, and that documents relative to piracy make interesting reading.

It is a matter for regret and on the editor's part for apology, that the book should have been so long in preparation. Work on it was begun prosperously before our country was engaged in war, but the "spare time" which the editor can command, always slight in amount, was much reduced during the period of warfare. Moreover, the Society, very properly, determined that, so long as war continued, the publication of their volumes and the expenditures now attendant upon printing ought to be postponed in favor of those patriotic undertakings, especially for the relief of suffering, which have made their name grateful to all lovers of the Navy and in all places where the Comfort and the Mercy have sailed.

It may be objected against the plan of this book, that privateering and piracy should not be conjoined in one volume, with documents intermingled in one chronological order, lest the impression be created that piracy and privateering were much the same. It is true that, in theory and in legal definition, they are widely different things and stand on totally different bases. Legally, a privateer is an armed vessel (or its commander) which, in time of war, though owners and officers and crew are private persons, has a commission from a belligerent government to commit acts of warfare on vessels of its enemy. Legally, a pirate is one who commits robbery or other acts of violence on the sea (or on the land through descent from the sea) without having any authority from, and independently of, any organized government or political society. (Fighting and bloodshed and murder, it may be remarked by the way, though natural concomitants of the pirate's trade, are not, as is often supposed, essentials of the crime of piracy.) But wide as is the legal distinction between the authorized warfare of the privateer and the unauthorized violence of the pirate, in practice it was very difficult to keep the privateer and his crew, far from the eye of authority, within the bounds of legal conduct, or to prevent him from broadening out his operations into piracy, especially if a merely privateering cruise was proving unprofitable....