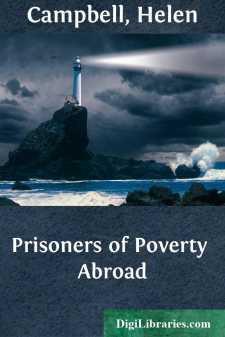 Add to My Favorites
Published: 11 years ago
Downloads: 16
Rating: (0 Votes)

CHAPTER I. BOTH SIDES OF THE SEA.

With the ending of the set of studies among the working-women of New York, begun in the early autumn of 1886 and continued through several months of 1887, came the desire to know something of comparative conditions abroad, and thus be better able to answer questions constantly put, as to the actual status of women as workers, and of their probable future in these directions. There were many additional reasons for continuing a search, in itself a heart-sickening and utterly repellant task. One by one, the trades open to women, over ninety in number, had given in their returns, some of the higher order meaning good wages, steady work and some chance of bettering conditions. But with the great mass of workers, the wages had, from many causes, fallen below the point of subsistence, or kept so near it that advance was impossible, and the worker, even when fairly well trained, faced a practically hopeless future.

The search began with a bias against rather than for the worker, and the determination to do strictest justice to employer as well as employed. Long experience had taught what was to be expected from untrained, unskilled laborers, with no ambition or power to rise. Approaching the subject with the conviction that most of the evil admitted to exist must be the result of the worker's own defective training and inability to make the best and most of the wages received, it very soon became plain that, while this remained true, deeper causes were at work, and that unseen forces must be weighed and measured before just judgment could be possible. No denunciation of grasping employers answered the question why they grasped, and why men who in private relations showed warm hearts and the tenderest care for those nearest them became on the instant, when faced by this problem of labor, deaf and blind to the sorrow and struggle before them.

That the system was full of evils was freely admitted whenever facts were brought home and attention compelled. But the easy-going American temperament is certain that the wrong of to-day will easily become righted by to-morrow, and is profoundly sceptical as to the existence of any evil of which this is not true.

"It's pretty bad, yes, I know it's pretty bad," said one large employer of women, and his word was the word of many others. "But we're not to blame. I don't want to grind 'em down. It's the system that's wrong, and we are its victims. Competition gets worse and worse. Machinery is too much for humanity. I've been certain of that for a good while, and so, of course, these hands have to take the consequences."

Nothing better indicates the present status of the worker than this very phrase "hands." Not heads with brains that can think and plan, nor souls born to grow into fulness of life, but hands only; hands that can hold needle or grasp tool, or follow the order of the brain to which they are bond-servants, each pulse moving to the throb of the great engine which drives all together, but never guided by any will of brain or joy of soul in the task of the day. There has been a time in the story of mankind when hand and brain worked together. In every monument of the past on this English soil, even at the topmost point of springing arch or lofty pillar, is tracery and carving as careful and cunning as if all eyes were to see and judge it as the central point and test of the labor done. Has the nineteenth century, with its progress and its boast, no possibility of such work from any hand of man, and if not, where has the spirit that made it vanished, and what hope may men share of its return? Not one, if the day's work must mean labor in its most exhausting form; for many women, fourteen to sixteen hours at the sewing machine, the nerve-force supplied by rank tea, and the bit of bread eaten with it, the exhausted bodies falling at last on whatever may do duty for bed, with no hope that the rising sun will bring release from trial or any gleam of a better day.

With each week of the long search the outlook became more hopeless....